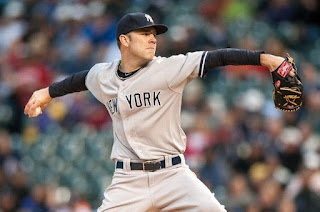 Phelps' strike percentage has dropped on his 4-seam fastball in his 2 starts, from almost 62% as a reliever in April to 57.9% in May.  Not surprisingly, his swing and whiff rates on the pitch have decreased as well.  PITCHf/x has Phelps' fastball velocity down by 1 MPH across the board this season, and pitch count efficiency has always been a problem for him when he's worked as a starter.  If he wants to stay in the game for more than 5-6 innings and wants keep the 4-seamer as a viable pitch to set up his offspeed stuff, he needs to throw it for strikes.  I appreciate trying to hit corners to get ahead, but if that's going to be your approach then you need to hit those corners.

He hasn't used it much this season (about 6.0% of the time), but all the stats suggest Phelps' changeup might be his most effective pitch.  He's shown the ability both to throw it for strikes (65.5%) and get hitters to swing and miss at it (20.7%), and he's able to locate it more consistently than his 2-seam fastball and his curveball.  Both of those pitches have served Phelps well in their own ways at different times this season, and he's using them more this year at the expense of his 4-seamer.  His changeup still remains arguably his most effective offspeed pitch, and could become even more so if Phelps starts to throw more fastballs for strikes.  He went to the changeup last night when he didn't have his curveball and it worked.  Phelps needs to remember that he's got that bullet in the chamber anytime.

Overall, Phelps' numbers don't look that different than Nova's.  He had a couple poor relief outings early, but has turned things around since getting his shot at the rotation.  With Andy struggling and everybody keeping a radar gun on CC, there are still some lingering concerns about the rotation and the Yankees will be looking for a 5th starter who's at least not going to be a constant burden on the bullpen every time out.  Phelps has shown himself to be better at that than Nova in his 2 starts and could be in line to keep the spot if Joe isn't totally sold on Nova.  It could come down to who can throw their fastball with more consistency.

(Pitch plot and stats courtesy of Texas Leaguers)
Posted by Unknown at 1:47 PM