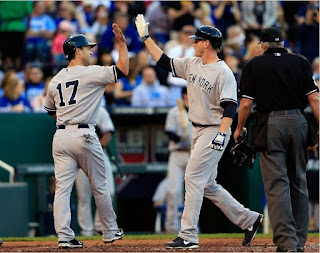 The Yanks will send David Phelps and Vidal Nuno to the mound for today's starts, not exactly household names when you think of the New York Yankee starting rotation.  They have a combined 13 career starts between them, all of them Phelps', and would not be in the rotation right now were it not for Ivan Nova.  Phelps took over Nova's spot in the rotation after Nova hit the disabled list with triceps inflammation a few weeks ago; Nuno gets the start tonight in place of Nova, who felt some tightness in his left side playing catch yesterday and will likely spend a little more time on the DL.  Nuno has made just 1 appearance since being called up and tonight will be his first career Major League start.  Not exactly standard practice for a first career start, but then again, what's been standard about this season so far?

Backing one or both of them up will be Adam Warren, another Triple-A starter who was forced into bullpen duty because of all the injury problems.  Backing him up will be Brett Marshall, who has zero Major League experience but is scheduled to pitch today and he could be called upon for the second game in a pinch.  If he's not needed as the doubleheader 26th man, that job will probably go to Corban Joseph, a lefty swinging second base prospect who's only around because the team's infield depth is a dead zone.  Jayson Nix and Chris Nelson haven't been making anybody forget about Jeter and A-Rod, no matter how much Bob Klapisch tries to convince us otherwise, and Eduardo Nunez was placed on the DL this weekend, opening up another roster spot for a Triple-A filler piece in Alberto Gonzalez.  Seriously, Alberto Gonzalez, Chris Nelson, Chris Stewart, Ben Francisco, Adam Warren, Vidal Nuno, and Preston Claiborne are all on the Yankees' active roster today.  And the team is 10 games over .500.  Think about that.

To add to the entertaining chaos that is this team right now, consider that its 2 best relief pitchers, D-Rob and Mo, come into today's doubleheader each having pitched in 4 of the last 5 days and may not be available for one or both of the games today.  Or that Vernon Wells, arguably the most criticized of all the offseason additions, is currently second among all AL outfielders in fWAR (1.4) behind only Mike Trout.  Or that they might get Curtis Granderson back sometime this week, as he's already completed 4 of what was reported to be a 3-4 game rehab assignment in Triple-A.  There's been no shortage of talking points, concerns, or intrigue surrounding this club in the first 6 weeks of the season.  They aren't sexy, they haven't always looked sharp, but they've gotten the job done and there's been something fun and entertaining about the way they've done it.  Today's doubleheader will just be the latest example.
Posted by Unknown at 9:30 AM