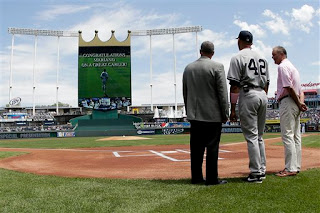 - Kuroda: 7.2 IP, 7 H, 2 ER, 1 BB, 1 K.  Not a dominant game by Hiroki, but he didn't need to be dominant against a struggling KC lineup.  He located down in the zone, made the hitters swing at the pitches he wanted them to, and got a lot of GB outs.  Nothing wrong with a stress-free day like that.

-5-8 Spots in the lineup: Combined 0-16 with 6 K and 4 LOB from Ichiro, Nix, Overbay, Nelson.  The kind of day you have to live with every now and then with this group.

A quick stop in Cleveland on the way back to New York for tomorrow' make-up doubleheader.  David Phelps will start the first game and it sounds like it's going to be Vidal Nuno in the nightcap.
Posted by Unknown at 7:31 AM