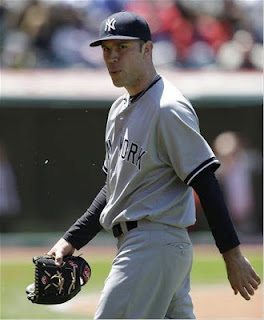 - Phelps: 6.2 IP, 4 H, 1 ER, 5 BB, 7 K.  Phelps chose to not head my advice of being more efficient and throwing his fastball for strikes, and it probably cost him another inning of work.  5 walks is never a good number, but give him credit for working out of jams and keeping the game close.  His stuff has proven to be more than capable of getting Major League hitters out.

- 1-5 spots in the order: Combined 2-19, 1 BB, 5 K, 6 LOB.  You can live with a nothing performance from the bottom of the order when it's the guys the Yankees played in this game.  What you can't live with is an equally useless performance from the top of the order, from guys like Ichiro, Cano, and Hafner.  They shouldn't be swinging early in the count all the time and popping up and failing to move runners over.  Tough to win when nobody hits.

The second game of the series is coming up in less than an hour.  Nuno makes his first career Major League start for the Yankees.  Trevor Bauer gets the ball for Cleveland.
Posted by Unknown at 1:47 PM