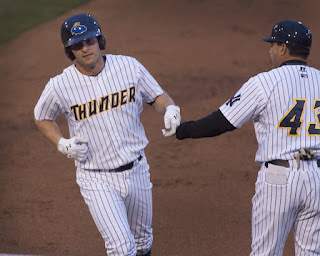 Fresh off winning the award for International League Player of the Week for last week, Almonte is off to a great start in his first Triple-A season.  An improved approach at the plate has both his BB (14.5%) and K(17.1%) rates heading in the right directions and has made him a more balanced hitter (.294/.397/.451).  Were it not for the fact that he's a better left-handed hitter than right, he could be the next in line to get a call up to the show.  As it is, Almonte has put himself firmly on the radar for a possible call up later this season.

The Yankees stuck with him this season as a starter and he's predictably let them down with more bouts of inconsistency and shaky command.  In 6 starts, Betances has given up 16 ER and 16 BB in 24.0 innings pitched.  He's also thrown 4 wild pitches and hit 2 batters.  The thought going into the season was that Betances was going to be converted to a reliever full-time.  Based on the early returns from his first 6 starts, that transition should probably happen sooner rather than later if the Yanks want to get anything out of him.

He never seemed to find his bat early last season in High-A, and struggled mightily at Double-A after getting bumped up to make room for Gary Sanchez, but Murphy has gotten over that, made the adjustments, and has been raking since day 1 this season in his return to the Thunder.  After last night's game, he's sitting at .318/.412/.553 with 4 HR, 18 RBI, and 18 R scored.  He's assumed the full-time starting role and has done a good job handling a pretty well-stocked pitching staff, and the reports on his defense continue to be positive.  If he keeps this up, he'll be at Triple-A by the summer.

After dominating the AZFL, Heathcott came into this season with some added hype.  So far he hasn't been able to live up to it, both due to some early nagging injuries and lack of experience at the Double-A level.  The thought was that Heathcott needed a lot of reps and his early offensive performance has supported that theory.  His batting line is just .200/.275/.289 and he's struck out in 26 of his 100 PA.  It's not all bad, though.  Heathcott has also drawn 10 walks and showcased the rest of his tools in small doses.  He just really needs to stay on the field and get a shit ton more ABs to refine his approach and swing mechanics.

He's a college hitter, so he should be raking in the low levels, but there's no denying that Refsnyder has been outstanding in his first 30 games this year.  After hitting .370/.452/.481 in 13 games at Charleston, Refsnyder hasn't let up in his 17 games for Tampa, putting up an even better .385/.512/.523 line in 78 PA.  He's still not that great defensively but he is 11-11 in SB attempts, so the athleticism is there.  Refsnyder is starting to stand out as the early best player from last year's draft class, and I expect him to get bumped up again to Trenton when Angelo Gumbs comes off the DL.

This may be a little harsh, because his ERA and FIP values are right in line with where they were last year, but the rest of Mitchell's peripherals don't paint a picture of a player who's gotten any better.  He got shelled last night and has now given up 35 H and 23 BB in 36.1 IP.  Mitchell's inability to command his stuff consistently never allows him to pitch deep into games, and his lower K rate early creates concern for me about how he'll translate to the upper levels if that command never comes.

He's been on the fringe of the pitching prospect discussion since being drafted in 2010, and so far this season it looks like Encinas is finally putting things together and establishing himself as someone worth watching.  In 6 starts, he's allowed just 3 ER in 32.1 IP and had rattled off 3 straight starts without allowing an ER before giving up 2 in his last outing on Saturday.  He doesn't turn 22 until late December and he's starting to trend in the right direction in his first full-season league experience.  I wouldn't be shocked to see the Yanks take it slow with him.

This kid made his way onto a few top 10 lists after his dynamite rookie year in 2011.  Since then, he's looked less and less like a legitimate prospect at even the Double-A level.  After a good first week at the plate, DBJ has reverted back to last year's form, hitting just .195/.252/.271 in over 120 PA.  Those poor numbers are even worse when you consider that this is his second go-round in Charleston, as do his BB (6.0%) and K rates (27.6%).  Bichette needs to start playing better all around or he's at risk of falling into early bust category.
Posted by Unknown at 7:48 AM