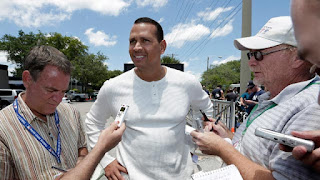 
"Obviously, Alex Rodriguez hasn't figured out he is to the Yankees what Freddy Krueger is to REM-stage sleep – a recurring nightmare."

You're not even going to make this easy on us, are you, Bob?  Just cutting right to the chase.  OK, I'll bite.  Sweet 30-year-old pop culture reference, ass.  You couldn't get more creative and try to spin it into something from "Inception"?  And last time I checked, Freddy Krueger never leads the Yankees to a World Series title in 2009 in any of the "Nightmare on Elm Street" movies.  A-Rod actually did that in real life.  If that's a nightmare as a Yankee fan, sign me up for one every night.

"As of Monday, as he worked out for the first time in Tampa, Fla., Rodriguez was officially back in the Yankees’ faces."

Or in Tampa, far away from the team and quietly continuing his rehab work.  Same difference.

"A-Rod told reporters he has 'unfinished business' from 2012, which, to Yankee elders, is the kiss of death."

Of course.  Because why would the "Yankee elders" want the guy they're paying through the nose for for the next half decade working hard and coming back determined to play well?  That would only make the contract that they chose to pay him and have no way out of a little bit less of an anchor if he actually does it.  Wait ...

"There are two major questions that will dog Rodriguez until the moment he steps into the batter’s box later in the summer. Do the Yankees really need him back?"

"Or more pointedly phrased, aren't they better off without him?"

This is A-Rod Trolling 101.  "Oh, he's such a distraction, he's such a prima donna, he brings all this bad attention to the team."  Meanwhile, when he arrived at the team facility in Tampa yesterday, he tried to do so quietly through a back entrance and away from the media while every beat writer who was there was tweeting away like little girls about how he was showing up soon and what car was he going to show up in and what was he going to wear.  The Yankee MSM doesn't just feed into the idea that A-Rod is a distraction, which admittedly he can be at times and has been before, they fuel it.

These guys know exactly what they're doing and they know they can throw as much A-Rod shit (figuratively) at the wall as they want because people are going to lick it up (figuratively) and give them the chance to write the follow-up slop like this piece because they've been conditioned to think A-Rod's a prick.  It's not reporting a story, it's using your position as a reporter to create the story you want to write.  I'm not sure, but I think that's called "fiction."

"The second line of questions are even trickier: What kind of player will Rodriguez be after his most recent hip surgery?"

No, Bob, that's not tricky at all.  Here, let me answer it for you.  He's going to be a lesser player than he was before, just like he was after the first hip surgery and just like he's been the last few seasons.  It's what happens when a player gets old.  Just because he isn't going to be 2007 A-Rod and just because he took steroids doesn't mean the team is better off with Jayson Nix at third and Kevin Youkilis in a back brace like Dee from "Always Sunny."

"The stigma alone stands as an obstacle to future success: If Rodriguez hits, the assumption will be that he’s back on the juice. If he slumps, it’s because he’s off the juice."

Hasn't that been the stigma since he got caught the first time?  It's not like the second 'roid accusation makes the first one null and void.  And at this point, who gives a shit about that?  If he hits, the offense will be better off.  If he slumps, he'll still probably produce more than Nix.

"If you believe the Miami New Times documents are authentic, then it becomes possible to view A-Rod’s entire Roy Hobbs comeback four years ago as phony."

What?!?!  A Roy Hobbs connection???  There are literally no parallels between the Roy Hobbs story and A-Rod's career.  None.  Who in their right mind would view anything about A-Rod's 2009 season as comparable to Roy Hobbs??  I need to know who these people are so I can make sure to avoid them at all costs.

"This might be A-Rod’s dream, but as of Monday, the Yankees believe otherwise. They just added Freddy Krueger to the roster."

No they didn't, you jackass.  He's still on the 60-day DL.  If you're going to try an over-dramatic conclusion sentence that ties back to your original lame opening joke, at least make it accurate in baseball terms.

Like I said before, I know this is exactly what Klapisch wants.  I know by writing this post I'm feeding into his idiocy just as much as all the mouth-breathers out there who read the article and went, "yeah, fuck A-Rod."  The rest of the crew at IIATMS/TYA recognized this blatant trolling and chose to ignore it today, to not even give Klapisch the satisfaction of a link to this garbage, and more power to them for that.  They're more mature folks than I.  I can't let shit like this slide, the same way I can't let it slide with Marchand or Matthews.  These guys are useless.  Fucking useless.  They are paid good money, much more than you or I, to cover the team and this is what passes as good coverage.  This is what passes for sports journalism.  It's a disgrace.

Alex Rodriguez has been so far off the radar since the first Biogenesis story broke that I'm willing to bet that most intelligent Yankee fans hadn't even been thinking about him.  With all the other injuries, the scramble to fill the roster, and the pretty damn good start the team has gotten of to, there's been so much to follow and analyze and talk about without even having to remember that A-Rod existed.  It's all right there in front of these guys and this is still the path they choose to take.  Ignore the team on the field, create some fake drama with a few tweets here and there, shit out another "A-Rod sucks" article, and call it a day.  Troll, rinse, repeat.

I don't know what's worse, that guys like Klapisch and Marchand and Lupica get away with passing this stuff off as actual Yankee coverage and reporting, or that too many people out there actually accept it as such.

P.S.- Wake up, North Jersey.  You've published this same article before.
Posted by Unknown at 12:51 PM

I only think of Alex on nights like last night. When Jayson Nix is the #2 batter. (Even tho he actually got a couple hits last night, day in, night out, I'd rather have Freddy on 3rd.)