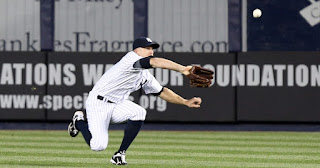 Not a celebration in the sense that we should all be popping champagne and pulling our kids out of school to mark the occasion, but at least in the sense that a small celebratory fist pump is mandatory.  The implication here is that Yankee brass seems to be making decisions based on what's best for the team and not based on the name on the back of the jersey or the reputation associated with it and that's a good thing.  The plain fact of the matter, as it's been for a while and will continue to be, is that Curtis Granderson is not a good defensive center fielder and Brett Gardner is a tremendous one.  Anybody who's watched a fair share of the team's games this season can attest to that as Gardner has already made a handful of great plays that Granderson probably wouldn't have made.

According to FanGraphs, Gardner's current 3.0 defensive rating ties him for 14th among all Major League outfielders and 4th in the AL.  On a team that boasts plenty of above-average or better defenders (Overbay, Ichiro, Stewart, Wells), Gardner has been the best so far and he's been the best in one of the most critical defensive positions on the field.  The thought was always that Gardner would excel as the full-time center fielder and he's done exactly that.  With as well as he's been playing out there, why mess with that and risk negatively impacting the team?

The Yankees don't owe Curtis Granderson anything based on what he's done in the past, definitely not in his walk year.  He's capable of learning a new outfield position just like Ichiro did when he came to New York, just like Gardner has in his career, and just like countless other players have done before when it was discovered that they weren't great at their current position.  Joe said C-Grand has been taking reps at all 3 outfield spots during his rehab work in Tampa, and the expectation is that he'll continue to do that as he gets his ExST work in.  With the Yanks already having a lot of defensive flexibility in the outfield, this move only adds to that while still giving them a backup option in center should Gardner have to miss time.  Hopefully this is the plan the team sticks with and we don't see another last-minute switch when Curtis returns.
Posted by Unknown at 1:30 PM