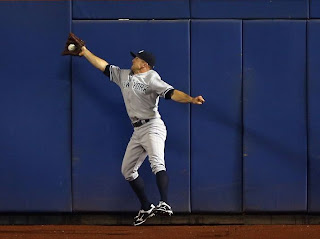 - Gardner: 2-4, 1 R.  Made solid contact in all 4 PAs last night, 2 of which resulted in hits and 2 of which didn't.  He was the only Yankee hitter who looked comfortable against Harvey and he's quietly putting together a really nice month at the plate.  He's also good for a really nice defensive play once every handful of games.

- Kuroda: 7 IP, 4 H, 0 R, 0 BB, 7 K.  Just a terrific outing from Hirok.  Sure it was against a crummy Mets lineup, but he pitched exactly like you would expect him to against a lineup like that.  He was good with his fastball location all night, and worked well with his slider and splitter down and out of the zone to get a lot of swings and misses.

- Chris Stewart: 0-3, 2 K, 2 LOB.  Nothing at the plate and not much behind it either.  Stewart let another passed ball get by him last night on an almost too-easy-to-catch fastball and failed to block Gardner's throw home in the 9th, allowing David Wright to advance.  Why the fuck is he in the lineup again?

- Cano: 1-4, 1 K, 3 LOB.  Cano's month of mediocrity continues.  He did nothing in 3 PA against Harvey early in the game, 2 with Gardner on base, and only got to him when he was tired in the 8th.  His error in the 6th was pretty sloppy too.

The series shifts to Yankee Stadium tonight for the final 2 games.  Starting matchup is David Phelps against Jeremy Hefner.  Get ready to tell your kids where you were for that one.
Posted by Unknown at 7:33 AM