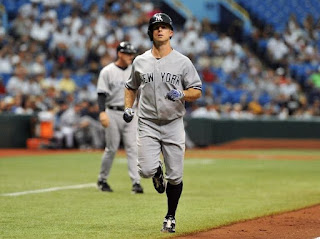 He's as locked in as I can ever remember seeing him right now and his performance against Matt Harvey last night made that clear.  Gardner had 4 good at-bats against Harvey, hit the ball hard all 4 times, and got 2 well-earned hits on well-placed and well-timed swings.  Gardner's got a .343 BABIP in May and it's no fluke.  He's stinging the ball at a 31.18% LD/33.3% GB/34.8% FB clip this month and both his timing and mechanics at the plate look really smooth.  He's still taking a more aggressive approach, not walking more or seeing more pitches than he did last month, but he's generating much more off those swings and doing it at a time when the team really needed it.

And let's not forget that Gardner has been a nightly Web Gem waiting to happen in the outfield.  Both his XBH-robbing catches against Daniel Murphy in this series, while surely not getting the props they deserved on SportsCenter or BBTN, were terrific plays.  They showcased not only Gardner's incredible speed and ability to cover ground but also his outstanding reads and sense of timing.  Even though it's a rough stat to use in small sample sizes, Gardner's current 18.0 UZR/150 rating ranks him 5th overall among Major League center fielders, 2nd in the AL behind only Lorenzo Cain.  Gardner is just an outstanding defensive player and it's become downright fun to watch him out there.

This kind of hard-hitting offensive production is going to tail off, and it'd be foolish to expect it not to.  Gardner isn't the type of player who can sustain a 30+% LD rate over an extended period of time.  Sooner or later he'll come back to earth and then it probably will become important for him to take a more patient approach.  What won't go away is his plus speed and the value it creates on the rest of the diamond.  Gardner has been hands down the most productive Yankee of the week and the month, and his speed will give him the tools to continue to be productive even when his bat cools down.

P.S.- Amazing what happens when you actually play the guy eh, Joe?
Posted by Unknown at 12:39 PM