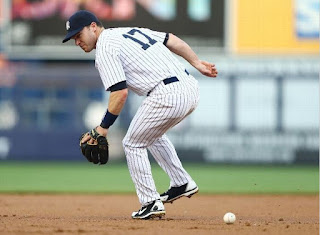 
The results aren't even as frustrating as the level of play that's created them.  When a team, even the Mets, beats your best pitchers for 1-run wins you just tip your cap and move on.  But when "defense first" catcher Chris Stewart is letting passed balls get by, and starters aren't making it out of the 1st inning, and Robinson Cano is swinging at balls up at his eyes, and Jayson Nix is booting routing double play balls, and nobody wants to try to take a pitch or work a count despite their slump, that's not bad luck.  That's bad baseball.

This is all very frustrating to be sure.  You're lying to yourself as a person and a Yankee fan if you say otherwise.  It's also not unexpected at all.  We've known for weeks now that this team was greatly overachieving any expectations we had for it before the season started.  While we've enjoyed the first 50-game ride and gotten to like this weird rag-tag bunch, we've always known in the back of our minds that this was always a possibility and the likely endgame for this group.  That the carriage would turn back into a pumpkin.  It was just a matter of when.  That question is starting to be answered right now and as tough as it is to watch there's really no reason to panic, just like there wasn't the first time Stacey told you not to.

Keep in mind that the Yankees are a pair of normal D-Rob/Mo appearances away from being 2-2 in their last 4 games.  Their method this season, however inexplicable it is that it's working, is still working.  They're still in plenty of ballgames, they're still getting relatively good pitching, and they still have chances to win even as the darkness of regression settles over some of the new acquisitions.  As Harvey Dent once said, the night is darkest just before the dawn.  And my friends, I promise you the dawn is coming.  Mark Teixeira and Kevin Youkilis are coming.  Andy Pettitte is coming.  Michael Pineda is coming.  C-Grand, Francisco Cervelli, and maybe even those 2 old guys on the left side of the infield will be back.  The cavalry is still on its way and the Yanks are still in great position in the battle for the AL East.

Losing games is never a good thing, no matter how much Michael Kay wants to try to trick us into thinking it is.  But this recent patch of losing is no cause for panic in Yankeeland.  There's a lot of season left, a lot of player upgrades to be made, and last night's loss just means tonight is another chance to start a new winning streak.  It's all good.
Posted by Unknown at 12:30 PM