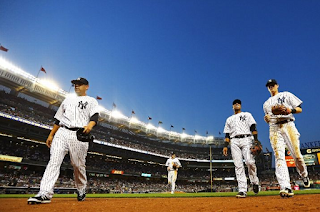 It's been a rush of a week with travel Monday/Friday and about 4.5 days worth of work crammed into 3, so I really don't think asking the Yankees to get 1 measly win to save some semblance of dignity in this series was too much.  The first 3 games of this series had been bummerific enough.  No need to send me home for the weekend with a frown on my face.  Vidal Nuno and his bag of left-handed tricks was on the mound before presumably going back down to Triple-A SWB when Andy comes back Monday, against the pretty terrible Dillon Gee.

- Deflating 1st inning from the Bombers.  Brett Gardner and Robinson Cano led off with singles and were stranded after back-to-back Ks by Wells and Hafner and an Overbay groundout back to the pitcher.

- The Yanks left 2 more on in the 2nd but finally cashed in when Cano came up again in the 3rd.  He got a hit first-pitch swinging the first time.  Second time he needed just 1 more pitch to park a solo HR in the right field seats.

- He gave up a 2-run homer to Marlon Byrd in the top of the 2nd after trying a fastball up 1 time too many, otherwise it was hard to find fault with Nuno's night.  He allowed just those 2 runs on 3 hits in 6 IP, and retired the final 9 batters he faced.

- He got no support other than Cano's HR and left behind, though, as the offense continued to be inept and impatient to an almost comic level.  Dillon Gee had 8 strikeouts and 7 GB outs through 6 innings.  On 69 pitches.

- Joba Chamberlain didn't get the nod for the 7th inning after Nuno.  That went to Shawn Kelley and he struck out the side swinging.  But Joba was involved in the mess in the 8th that gave the Mets their insurance run, allowing the runners to move up on a wild pitch.

- It only got worse for the offense.  All you need to know is this- After Cano's HR in the 3rd, the final 20 Yankee hitters were retired in order.

- Nuno: 6 IP, 3 H, 2 ER, 2 BB, 2 K.  He got beat on one bad pitch really.  The rest of outing was just fine from Nuno, more of what we've become used to seeing from him.  He'll stay on the radar for the next time a spot start is needed, and he's all but bypassed Nova as the team's official 6th starter.

The loss streak is up to 5 and the Fraud Sawx are coming to town.  Hopefully Teix and Youkilis make it back tomorrow night to give this lineup a jump start and CC Sabathia some support.
Posted by Unknown at 5:06 AM

How about CC Sabathia showing up for some support? I mean, the guy has been his own worst enemy lately. With all the question marks going into this season, he was supposed to be the solid performer.

Well he did have some question marks attached to him too. But I think the Yankees were hoping for more than they've gotten from him so far.