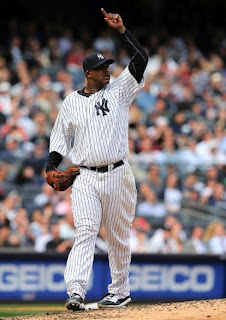 To establish a basis for comparison, let's take a look at what CC's pitch mix breakdown has looked like during his previous four years in pinstripes **:

What we see there is not uncommon for a guy who comes into the league as a young power "thrower" and then learns to harness his offspeed command over time.  It's also not an uncommon trend to see for a pitcher with CC's high career innings count and resulting loss of velocity on his fastball as he moves into his 30s.  When CC joined the Yankees, he was still throwing a mid-90s 4-seamer and had yet to establish any of his offspeed pitches as dominant out pitches.  Over the course of the last four seasons he's seen his 4-seamer velocity dip into the low-90s, with his yearly usage of the pitch declining along with it.  CC has replaced those fastballs with more sinkers and sliders, two pitches that he's all but mastered in that time, while his changeup usage has hovered in the mid-teens range.

Which brings us back to my theory on the slider/changeup, where a quick check of yesterday's pitch breakdown shows that there was definitely a big bump in changeup usage:
Nearly a third of the pitches Sabathia threw yesterday were changeups, most of them on the outside corner to right-handed hitters.  The big increase in changeups is offset by a significant decrease in the number of sliders CC threw.  While the ESPN commentators were correct in pointing out that CC has improved his changeup over the past few seasons, it's still been nothing better than his 3rd or 4th best pitch over the last four seasons.  His sinker has become his go-to pitch to keep hitters off his 4-seam and get ahead in the count and his slider has become his go-to out pitch.  So why the sudden change?

One explanation could be that someone or multiple someones (Joe, Rothschild, Cash, CC himself) want to limit the number of sliders CC throws early in the season so as not to put added stress on his surgically-repaired elbow.  That would certainly be sound logic and would be in line with the limited work Sabathia got in camp.  Another could be that there was something in the scouting report that suggested the best way to attack Bahhston's gaggle of righties was on changeups away and not sliders down and in.  CC got 11 swings and misses on his 33 changes yesterday and recorded 3 of his 5 strikeouts on the pitch, so again, logic would agree with that.  Another explanation could be that he just didn't have a good feel for the slider during warmup and decided to lean more on his change.  And another still could be that it was just a small sample size coincidence.

Just as it's too early to try to draw any meaningful conclusions about CC's 4-seamer velocity based on one start, it's also too early to try to make a definitive statement on the somewhat dramatic shift in pitch mix yesterday.  He did throw fewer sliders and more changeups to right-handed batters last season, when his slider usage was at its highest, but still nowhere near the 2-to-1 ratio at which he threw changeups to sliders yesterday.  If this is another tactic being utilized by the Yankee coaching staff to lessen the stress on CC's arm and make sure there are no lingering issues in his elbow, I'm OK with that.  If it's not, hopefully we see a return to higher slider usage in his next couple starts, as that is still his best and most effective out pitch.

**- Indicates yearly pitch percentage breakdown being taken from 4/1-10/31 of each year.  For more on CC's outing yesterday, check out Derek Albin's post on his release point over at Pinstripe Pundits.

(All stats courtesy of Texas Leaguers)
Posted by Unknown at 2:00 PM