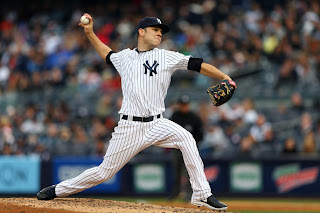 The early areas of concern, CC Sabathia and Hiroki Kuroda, have seemingly got themselves fixed after poor first starts and are right back to being the reliable anchors of the group, capable of going out and giving the team 6 innings even on their worst day.  The next three behind them, however, aren't as solid.  Andy Pettitte, despite showing no signs of regressed performance in his first two outings, has been bothered by some back problems in the last week and is now scheduled to make his next start on Friday, 10 days after his last one.  Chances are good that Joe and Larry Rothschild won't leave him out there for 8 innings again on Friday, and it wouldn't shock me to see Pettitte on a pitch count.  If that happens, or if he starts feeling pain in his back again, Joe's going to need to get a few innings out of somebody so as not to burn out the rest of the bullpen.

Of greater concern might be the poor starts of both Hughes and Ivan Nova on the back end of the rotation.  Both have suffered from command problems in and out of the strike zone, and Phil is once again falling into predictable routines with his fastball selection and location.  Nova, who was skipped over due to the weather after just one start, was inefficient and inconsistent in his 5 innings of work last night and Joe had the bullpen up and ready to relieve him in the 3rd inning.  Neither guy has made it past 5 innings in a start yet, Hughes hasn't made it past 4, and both are giving up hits and runs at a high rate.  It's clear through his recent decisions and quick willingness to get the 'pen up in their starts that Joe doesn't have much confidence in Nova or Hughes right now.

This is where Phelps and Warren come in and become important again.  At this point, they've been working out of the 'pen long enough that they probably wouldn't be able to make a spot start and throw a full starter's load of pitches.  That job would likely go to Vidal Nuno or (gulp) Chien-Ming Wang if needed.  The best thing Phelps and Warren can do is be the long relief handcuffs to the ineffective Nova and Hughes and the possibly physically hindered Pettitte.  That's exactly how Joe used Phelps on Saturday against Baltimore and Phelps responded with 4 shutout innings to give the Yanks a chance in that game.  Joe's also already seen Warren be effective in the role when he threw 5+ 1-run innings in relief of Kuroda after his finger injury.

With these two already being labeled as "tweener" type of pitchers at this level, employing them in shorter roles like this would be a great way to let their stuff play up and maximize their value.  It could also be a great strategic move to keep them ready and available during Nova and Hughes' starts as crutches for Joe to lean on if things start getting ugly.  Kelley has already pitched himself out of the role, and Joba hasn't looked much better, so there's innings to be had.  Phelps and Warren have proven themselves to be the most effective middle relief pitchers in the Yankee 'pen so far, and the early issues in the rotation make their roles more important.
Posted by Unknown at 11:00 AM