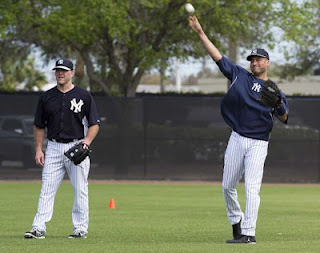 The Yankee infield has been the nerve center of the team for the last 4-5 years now.  Whether you were talking money, production, or name recognition, it was hard to argue that any group of players on the roster carried more weight than the Teixeira-Cano-Jeter-Rodriguez foursome.  In 2011 that started to change, as A-Rod really started to break down, Jeter continued to battle his age-related decline, and Teix had his third straight year of regressed offensive performance.  Things got worse last year when Teix and A-Rod both had more problems with injuries and further decline, and the positive of Jeter rebounding was negated to some degree by the season-ending broken ankle that many believe will hinder him in 2013.

This group carries most of its weight in the salary and name recognition categories only these days, and that could pose a serious problem to the Yankees' contention and payroll plans for the near future.  So as we're left to wonder what A-Rod has left in the tank and how much Teix's power will suffer as a result of his wrist injury, let's dive in and start figuring out what we do and don't know about this group.

Barring some unforeseen injury setback, The Captain certainly looks like a good bet to be manning his spot at short for the 18th straight year.  He played his first games in the field this past week and came away with no reported injury issues, which is really the last question he had to answer this spring.  It still remains to be seen how Jeter's already limited range will be impacted by the ankle, but there shouldn't be much doubt left, if any, that we'll see the familiar #2 out on the field and Bob Sheppard's voice introducing him on April 1st.

What We Don't Know- How Often He'll Be the Starting Shortstop

Now that the "will Jeter be ready to play on Opening Day?" question has been answered, the next question becomes "how often will Jeter play?"  The Yankees have a scheduled off-day after their season opener against the Fraud Sawx, but my money would be on Jeter getting a day at DH or a full day off sometime in the first handful of games to make sure he doesn't overdo it on the ankle.  Depending on how Jeter is feeling and producing, it also seems like there are going to be more rest days given to him on a regular basis in 2013.  Eduardo Nunez has gotten his spring reps exclusively at shortstop in preparation for this, but there still hasn't been any clue given as to what Jeter's playing schedule will look like.

I mentioned this earlier today in the latest "ST Winners & Losers" post, but Youkilis has been absolutely on fire at the plate in the last week.  8 hits in six games, all of them for extra bases, and he hasn't looked bad playing the field either.  Youkilis is the one new part of the Yankee infield equation this year, signed out of necessity to sub for Alex Rodriguez while he recovers from his hip surgery, and now that he's on the field he looks capable of bouncing back from his last couple of down years.

The problem with Youkilis, outside of the recent regression, was that he came with similar health concerns to A-Rod's.  Whether it was the thumb, back, or hip, Youkilis has missed at least 40 games in each of the last three seasons, and at his age there's little reason to expect that trend to not continue in 2013.  Rotating Youkilis and A-Rod at third, DH, and the bench looked like an ideal way to keep both as fresh as possible after Alex returns from the DL in July, but now with the Mark Teixeira injury that plan could go up in smoke before we even get to July.  Youkilis is going to have to play more while Teix is out, either at third base or first, and there has to be concern about burning him out physically as a result of the increased playing time.  Joe's got a lot of lineup juggling to do and Youkilis is one of the guys he can't forget about.

What We Know- That We Don't Know Anything About This Group

It's true.  We really don't know what to expect from anybody this year.  We don't know how much the ankle injury will affect Jeter.  We don't know how Youkilis will hold up or if he will produce.  We don't know if A-Rod has anything left after this second hip surgery and what he'll actually bring to the table when he returns to the lineup.  We don't know how Teix is going to come back from his wrist injury and if his days as an above-average player are over.  The only thing we can say we know with a fair amount of confidence is that Robinson Cano will be awesome again, but even he comes with a big unknown attached to him.

Realistically I think we can assume the Yankees are going to do whatever they have to in order to keep Robbie in pinstripes for the rest of his career.  Why else would they be bucking organizational tradition to talk new contract with him before the season starts?  He's hands down the most important position player on the team and everybody knows it.  With Scott Boras at the helm, though, you can never be too sure of anything and once Robbie hits the open market all bets are off.  The Dodgers are going to make a huge push for him and they've got more money that they're willing to throw around right now than Hank and Hal.  Yankee ownership knows this and I don't believe there's any scenario in which they won't be willing to match any other offer Cano gets, but stranger things have happened.  Just ask all those guys the Marlins signed last year and then shipped off to Toronto.