Teix's Wrist Injury Could Keep Him Out Longer 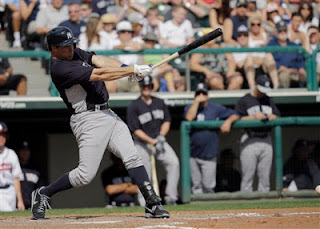 Mark Teixeira returned to camp yesterday morning and plans to remain with the team through the rest of Spring Training.  He is wearing a brace on his injured wrist and has still yet to be cleared to begin one-handed swinging exercises, but that's not the big news that came from yesterday's appearance.

The big news is that the diagnosis of his injury has changed.  What was first called a strained ECU tendon in his right wrist is now being called a tear of the tendon sheath.  When meeting with the media yesterday, Teix reiterated that the tendon itself is fine and not the problem, but the source of the injury now shifting to the tendon sheath could end up being worse news for him and the Yankees.  This is the exact same injury that Jose Bautista suffered last year and ended up with him having season-ending surgery when his attempts to come back quickly resulted in re-aggravation of the injury.

Teix and the Yankees have stated that there are no plans to rush Teix back and they are still planning on going the no-surgery recovery route.  That typically results in a 70% chance of full recovery, but the key is making sure that enough time is allowed for that full recovery to take place.  Teix is still on an 8-10 week timetable and May is being looked at as the earliest he could return, with early June now looking more likely.  Bad news for Teix and the team in the short term, but if it ends in a full recovery it will be worth it.
Posted by Unknown at 7:56 AM