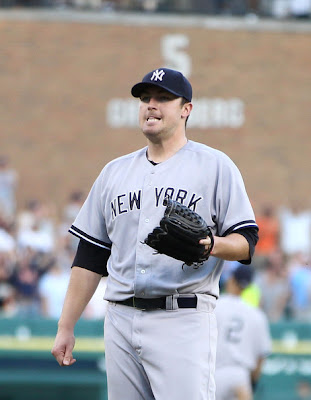 (How much can Hughes make for himself in 2013?  Courtesy of Getty Images)﻿

After a 2011 season that could only be called a complete disaster, Phil Hughes rebounded nicely in 2012.  He came into camp healthy and stayed that way for the entirety of the season on his way to a career high in starts (34) and innings pitched (201.0) between the regular and postseasons.  With other key members of the rotation either getting hurt (CC, Andy, Pineda) or flaming out (Nova), Hughes' mere presence in the lineup helped provide consistency and an extra innings eater, and after a rough April he actually pitched pretty well.

Earlier today, Chad Jennings, expanding on an idea originally included in a post by Joel Sherman last week, discussed the strange position Hughes finds himself in heading into 2013.  He's made himself a much more important part of the current and possibly future rotations after years of inconsistency and uncertainty, and at age 26 at season's start would be primed to earn himself a big payday in free agency next offseason.  He's also done/doing it during a time where the Yankees are tight with their money, and could very well price himself out of their range with a good year.  Complicating the matter even more are Hughes' spotty career totals and recent positive trends, the Yankees' own internal starting pitching questions, and the free agent market to be.

Working against Hughes in his upcoming free agency case, be it with the Yankees or any other team, is the fact that even if he stays healthy again for all of 2013 he will be a 7-year Major League pitcher with only 3 seasons of 100+ IP to his credit.  Through injuries, inconsistent performance, and mismanagement by the Yankees, Hughes has lost a lot of time and leaves himself with a bit of a small career sample size for teams to judge him on.  In the last 3 seasons, Hughes has posted FIP values of 4.25, 4.58, and 4.56, has never posted an ERA under 4.00, and has struggled with his command at times.  His ability to master a useful 3rd pitch has been an uphill battle, as has his ability to successfully use his pitches to work through lineups multiple times, and he did give up 35 HR in 2012.

On the other side of that coin are the positive steps Hughes took in the second half of 2012 to improve his game.  While the runs allowed numbers aren't that shiny, Hughes set new career bests in both K and BB rates in 2012, and after incorporating "The Slutter" into his pitch selection in late August looked much more like a pitcher capable of handling a #2 or #3 role.  As it was, Hughes gave up just 37 ER in 104 IP from June through August (3.20 ERA).  Once he started working the slider in more, Hughes posted his best K/9 (9.09) and BB/9 (2.08) splits of the regular season and pitched to a 3.82 FIP in the season's final month.  There's also the fact that Hughes' FB tendencies make him more susceptible to the longball pitching in Yankee Stadium, where 22 of his 35 HR allowed were hit, and the expectation that those totals would come down in a more spacious outfield environment.

Assuming his positive end-of-2012 trends are a sign of things to come, Hughes is set up to earn himself some serious coin next offseason.  He'll be in the final year of arbitration eligibility this season, and MLBTR predicts a salary in the range of $5.7 million.  Another healthy, productive, possibly statistically-improved 2013 season should put Hughes in line for offers in the $8-10 million range minimum, with the possibility of it creeping towards the 4 year/$52 mil that Edwin Jackson just got.  As the best available starter under 30, Hughes is going to be a hot commodity and one the Yankees could really use.  Hiroki Kuroda and Andy Pettitte will be coming off the books again after this season, presumably to retire, and there isn't a lot of certainty surrounding the Nova/Phelps/Pineda troika.  Hughes could theoretically be the #2 behind CC after this season.

But if he does stay healthy and pitch well in 2013, and his bargaining power grows heading into the offseason, how much will the Yankees be willing to commit to him to bring him back?  They're going to have a whole lot of money coming off the books when you factor in their other free agents, but the biggest internal priority is going to be re-signing Robinson Cano, something that isn't happening cheaply.  Derek Jeter's club option and the guaranteed second year for $6.5 mil that the Yanks gave to Ichiro will eat up more money, and a multi-year deal for Hughes could tip the payroll scale over the luxury tax avoidance limit.  For a team that has struggled to develop its own starting pitching and has made a huge commitment to building rotation depth recently, could the Yanks really let a 27-year-old Hughes walk?

If they do want to bring Hughes back and want to do it in a way that allows them to keep the $189 million goal in play, the best thing the Yankees could do would be to start talking new deal now.  That goes against the way the Yankees do business and could open a can of worms with Cano and Scott Boras that I don't think they'll want to deal with, so it probably won't happen.  The best thing the Yankees can hope for might be for Nova, Phelps, and Pineda to pitch well in 2013 and give them confidence that they can build their 2014 rotation for cheap around them and CC, making re-signing Hughes less critical.  But no matter what happens, the 2013 season is going to be one of constant discussion about Hughes and his future in a Yankee uniform.
Posted by Unknown at 3:05 PM