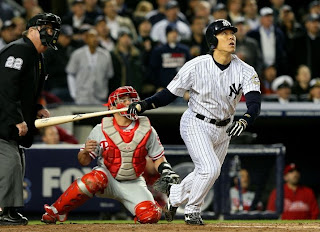 (One of the great moments in recent Yankee history.  Courtesy of the AP)

Hideki Matsui announced his retirement from baseball yesterday, ending the most successful Japanese-American baseball career this side of Ichiro Suzuki.  After 10 years with the Yomiuri Giants in the Japanese Central League and another 10 in MLB, 7 of them with the Yankees, Matsui decided to hang 'em up at age 38 after various leg injuries and just the natural wear and tear of 20 years of baseball sapped him of much of his power and physical skills.  Matsui doesn't have the career MLB accolades and awards of a Derek Jeter or an Alex Rodriguez, but he is undoubtedly one of the most memorable and popular Yankees of the 21st century.  If he does end up in the Baseball Hall of Fame, something William Juliano made a very strong case for yesterday, it's very likely he would go in with a Yankee cap on his head, a fitting ending to a great baseball career.


After racking up multiple championships, MVP awards, and All Star Game appearances in his 10-year Japanese career, Matsui came stateside to join the Yankees in 2003.  He hit .287/.355/.435 in his first season with 106 RBI, earning himself an ASG selection and a 2nd place finish in a very close and controversial AL Rookie of the Year race.  Over the course of his first 3 years in pinstripes, Matsui played in every single regular season game and notched another ASG selection and 1 top 15 AL MVP finish.  Over the course of his first 5 seasons, he drove in 100+ runs 4 times and scored 100+ runs 3 times, his RBI streak only being broken because of a wrist injury suffered in 2006.  Injuries would start to become a more common theme for Matsui as he moved into his mid-30s and his final years with the Yankees, but he still finished his Yankee career with a .292/.370/.482 slash line, 140 HR, 597 RBI, and 1 World Series title.

He was never a big WAR guy because of his limited defensive skills, but there was no denying that Matsui was a great offensive player.  Beyond just the HR, OPS, and wOBA numbers, Matsui was a master of working the count and drawing walks and also making contact.  In his 7-year Yankee career, Matsui posted a BB rate below 10.0% only twice and a K rate above 15.0% only once.  And while he wasn't as naturally graceful or athletically electrifying as Ichiro, it was fun to watch Matsui play with the same quiet, calm, smooth confidence every at-bat, every inning, and every game.  He rarely displayed a lot of emotion on the field, but Matsui was a true gamer, evidenced by his .312/.391/.541 career postseason batting line (.398 wOBA).  It was that consistent coolness and sense that the moment was never to big for him that made Matsui one of the biggest Yankee Stadium fan favorites in the mid-2000s.

Another thing that made Matsui so interesting and so well-liked on and off the field was his "different" personality.  Despite never mastering the English language and speaking through a translator, Matsui was known to joke with media members and teammates alike in the clubhouse, and his smile was always easily recognizable in a Yankee clubhouse defined by bland personalities and over-the-top professionalism.  Whether he was donating big chunks of money to various charitable organizations, declaring that he had won a clubhouse marriage bet by showing a pencil drawing of his wife to the press, or making media waves for his reportedly gargantuan porn collection, Matsui could always be counted on to be as entertaining off the field as he was on it.

Injuries forced Matsui into full-time DH duty earlier than he probably wanted, and certainly ended his career much more rapidly than he probably expected, but he'll always be remembered by Yankee fans and writers for the time he spent in the Bronx.  The guy got an RBI in his first career Major League at-bat, hit a grand slam in his first career game in Yankee Stadium, and capped off his final game in a Yankee uniform by driving in 6 runs in the deciding Game 6 of the 2009 World Series, winning World Series MVP honors in the process.  Personally, Matsui's 2-run homer off Pedro Martinez in the 2nd inning of that game and his 2-run double in the 5th that essentially ended the game are right up there with some of my greatest memories as a Yankee fan, and I'll always be a little bummed that I didn't get to write about Hideki more after I started this blog.  He seemed like a great guy, he was as clutch a hitter as one could be if you believe in that kind of thing, and he damn near single-handedly won the Yankees their most recent World Series title.

Labels: Former Yankees, Hideki Matsui, Looking To The Past