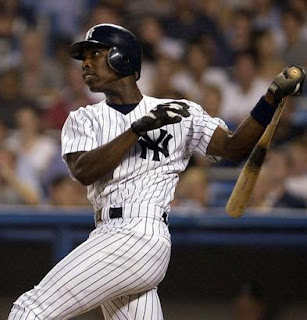 The Yankees officially kicked off their scrap heap picking for right-handed hitting on Wednesday with the signing of Matt Diaz to a MiL deal.  Almost as soon as everybody was done commenting on that deal, they let it be known that their search for a right-handed bat wasn't over, which isn't surprising in the least considering Diaz's recent track record.  The trade market continues to be an attractive and potentially deeper pool of talent to choose from, and another name that has popped up lately as a possibility is a familiar one.  It's been almost 10 years since Alfonso Soriano last wore the Yankee pinstripes, and he's a bit longer in the tooth than he was when he left.  But with Theo Epstein looking to rebuild the Cubs and Soriano still having plenty of right-handed pop, there's clearly a match to be made between he and the Yankees.


Soriano is no longer the player most Yankee fans remember him as.  Gone are the days of 30/30 power and speed potential and long gone are the days of Soriano roaming the infield.  But as he's moved into his mid-30s, Soriano has retained value as a plus power hitter and a pretty good corner outfielder.  He hit .262/.322/.499 in 2012 with 32 HR and 108 RBI, good for a .350 wOBA and 116 wRC+.  Combine that with a positive defensive rating and Soriano was worth 4.0 fWAR this past season, not too shabby at all for a 36-year-old.  His L/R hitting splits were negligible in 2012 (.350 wOBA vs. L, .349 vs. R), but Soriano has traditionally been a very good hitter against southpaws (.370 career wOBA) and would be a perfect pairing with the light-hitting left-handed Yankee corner outfielders.

There is some concern about age-related decline when you're talking about a player of Soriano's advanced age, and it's worth pointing out that his 2012 season was a bounce back from 3 seasons of down production prior.  Mike Axisa shot down the possibility of 2012 being a fluke on Wednesday by pointing out the very real shifts in Soriano's contact splits this past season after he shifted to a lighter bat, which should inspire confidence that Soriano can continue to be productive.  But the fact that Soriano doesn't walk much, never has, and had a 24.9% K rate in 2012 is still a concern, especially on a team that already has some low-walk/high-strikeout guys in its outfield mix.

The biggest factor in determining whether the Yankees obtaining Soriano is realistic, as it has been with damn  near everybody else this offseason, is the money.  Like Vernon Wells, Soriano is still owed a ton of money over the next 2 seasons, $36 million to be exact.  And while Soriano has proven to be far more productive than Wells over the last handful of seasons, this would be another scenario where the Yankees would probably only be interested if the Cubs were willing to eat a lot of that remaining money.  Jon Heyman reported that the Cubbies were willing to take on $26 mil, but even the essentially 2-year/$10 million deal that would be left would probably be too rich for the Yankees' blood, especially if they're also giving up a prospect in the process.

On paper, Alfonso Soriano is everything the Yankees are looking for.  He can provide right-handed power from both a corner outfield and DH spot, and still play above-average defense on days where he's subbing for Ichiro and Gardner.  But he would also come at a greater money and prospect cost than other options out there, costs that Cash might not be willing to pay for a soon to be 37-year-old player who has already taken steps to stem his age-related regression.  It would be fun to see Soriano in a Yankee uniform again, but right now I think the Yankees won't consider him unless those costs start to tip a little more in their favor.
Posted by Unknown at 9:05 AM