Yanks Have Interest In Torii Hunter And So Do I 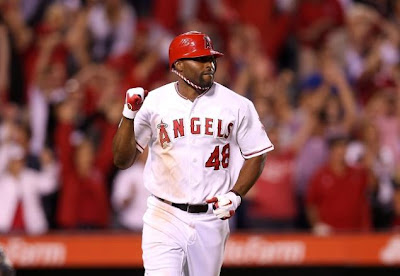 It was nothing more than a basic report from the infamous unnamed source that the Yankees are interested in free agent to be Torii Hunter, but when it's coming from Mark Feinsand you can put a little extra faith in it.  The Yanks don't appear to be wasting any time in seeking out a replacement for Nick Swisher in right field, and if they aren't going to get seriously involved in any kind of trade discussion for Justin Upton, Hunter would be an ideal 1-year stopgap signing.  Even at age 37, turning 38 next summer, Hunter brings a lot of things to the table that the Yankees need and a lot that meshes well with their team makeup and organizational culture.

First and foremost, Hunter is still a very productive two-way player, something the Yankees could definitely use in their outfield.  He's probably not as good as his .313/.365/.451 line from 2012 would lead one to believe; that slash was boosted by an abnormally high .389 BABIP this past season.  But Hunter still boasts a more than respectable .277/.335/.466 career tripleslash (.345 wOBA), has scored at least 80 runs and driven in at least 90 in 8 of his last 12 seasons, hit at least 20 HR in 10 of those 12, and still registers as an above-average defensive player and baserunner.  He doesn't have the speed he once had in his younger days, but Hunter could still play center in a pinch and would likely have no issues playing left field if needed.  Since 2001, Hunter has been worth at least 2.4 fWAR in every season and at least 3.0 in 8.

By all accounts, Hunter is also one of the best people in baseball, a consummate professional, and a great presence in the clubhouse.  He's not the "no worries, brah" goofball that Swish was, but he does bring a great balance of upbeat positive energy and the type of classic professionalism that the Yankees pride themselves on.  And with the Yankees building a reputation as a team that ringless veteran players want to go play for to chase a championship, and Hunter still chasing that elusive first World Series title, it's a natural fit for him to go to a team like the Yankees that's going to contend for that title if the Angels elect not to bring him back.

All indications are that the Angels are not even going to make him a qualifying offer, so right now it seems reasonable to expect Hunter to be available for a team-friendly price.  Even coming off a year as good as the one he had in 2012, Hunter, like Hiroki Kuroda at the same age, is a candidate for regression next season and that will limit his bargaining leverage a bit when talking new deals with potential suitors.  Getting Hunter on a 1-year deal at $10-12 mil would fill the most glaring lineup hole for next season without negatively affecting the payroll plans for 2014, and would also free up Cash's time to pursue trade opportunities for other players who fit the Yankees' needs (cough, cough, Chase Headley).

The call is for the Yankees to get younger this offseason, and that is obviously a worthwhile goal given the level of regression we saw from some key older players in 2012.  But the organization is not going to do that at the expense of winning, and with Hunter still being a productive player who can help them win next season without a long-term commitment, it's easy to see why he's worth pursuing even if he isn't all that young.  Hunter still has value, both at the plate and in the field, would bring some much needed right-handed power to a lefty-heavy lineup, and has the perfect type of personality to blend into the Yankee clubhouse.  As a short-term solution in right field, it's going to be hard to find someone better.
Posted by Unknown at 9:00 AM