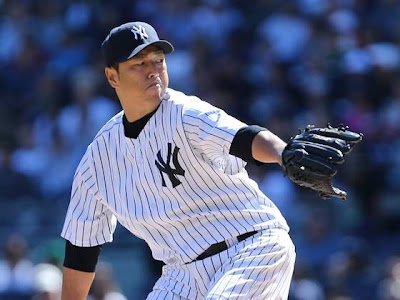 
There still is a very real chance that a team (or teams) will offer Kuroda a multi-year deal, but that team was never going to be the Yankees.  Between their 2014 payroll budget and the lesson they'll continue to learn through 2017 about the dangers of signing players in their 30s long-term, their plan was very likely going to be taking a 1-year-at-a-time approach with Kuroda.  That's what they did this past offseason when they first signed him and it worked out splendidly.  Knowing that they would prefer to keep to that 1-year approach and now knowing that Kuroda shares that preference, Cash and Co. can feel more confident that they can bring back Kuroda on another 1-year deal.  In fact, the $13.3 million benchmark for this year's qualifying offers could be enough to get the job done.  It's a safe but significant raise to reward Kuroda for his 2012 performance and comes with little to no risk for the Yankees.

Those lingering risks are what made the situation with Kuroda so tricky.  Yes, he had an outstanding season this year and has a clean recent track record with injuries, but he's still going to be 38 when next season starts and he will be coming off a career-high innings count.  There was some evidence that Kuroda was tiring late in the regular season, and even though he bounced back strong in the playoffs, there's no way of knowing for sure if those results would have been as positive as they were if he didn't get some extra rest.  Kuroda could be primed for regression next season or even injury based on his heavy 2012 workload, and as much as the Yankees probably need him next season, they don't need to be committed to another aging player on the downswing of his career.

All of that risk essentially goes out the window on the 1-year strategy.  If they make a qualifying offer to Kuroda and he accepts, then the Yankees have their #2 starter back for next season.  And if he does regress or get hurt, the effects will only be felt in 2013.  At the end of the season Kuroda's contract would still be coming off the books and the Yankees could re-focus their efforts to build a younger rotation without being saddled with another declining player.  If Kuroda doesn't accept the offer and eventually does sign elsewhere, the Yankees get another compensatory draft pick and can use the money they would have paid him to address other areas of need or attempt to sign another starter to a 1-year deal.

It's not like everything is peaches and cream for the Yankees right now in terms of building their 2013 rotation.  The only thing definite at the moment is that CC Sabathia will be the ace of the staff again.  With Andy Pettitte's comeback plans unknown, Hughes, Nova, and Pineda shrouded in varying degrees of uncertainty, and the bulk of the free agent pitching market being too rich for their blood, the Yankees could have been in a situation where they had to overpay to bring Kuroda back.  That pressure is off now that it sounds like Hiroki is only looking for another 1-year deal, and whether he ends up back in pinstripes or not, the Yankees stand to gain something from him this offseason without having to over-commit.
Posted by Unknown at 2:00 PM