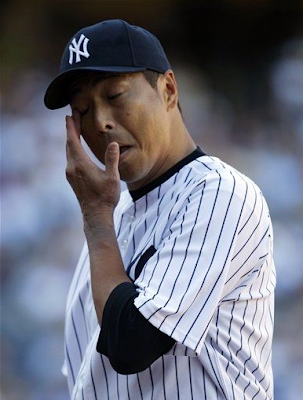 I've already thrown a Grade-A AB4AR jinx on the Yankees' playoff hopes once this season, and I've learned my lesson.  I've been taking very careful steps to not mention the "P" word like its a foregone conclusion again as we come down the homestretch of the 2012 regular season, even as the Yankees have turned things around, and I'm certainly not going to do that here.  What I am going to do is touch on some things that the Yankees should be monitoring as they make their final sprint to the regular season finish line.

A little over a month ago, I commented on the possibility of Kuroda getting overworked down the stretch after the incredible job he did putting the team on his back doe over the summer.  Kuroda finished the month of August strong, but September has been a different story.  In 4 starts this month he has pitched just 24 innings, never with an outing longer than 6.1 innings, and in those 24 innings he's pitched to a 5.63/4.15/3.26 line.  That xFIP number suggests that some small sample size shenanigans are in play here, but after spending the better part of the summer being flat out dominant, Kuroda's trend back towards mere mortal status this month has been noticeable.  He's getting hit more (27 H allowed), hit harder (11 XBH), and allowing more walks (7 in September after 9 combined in July and August) than he has in months.

There isn't much in his monthly velocity numbers to suggest that Kuroda is injured or tired, but a quick check of Texas Leaguers shows that he's shifted his pitch selection this month to be heavier on the slider and is throwing fewer sinkers than he has all season.  Kuroda has already reached a career high in IP this season, and when all is said and done he should reach new highs in starts and total pitches thrown.  He could very well be losing some of the feel for his stuff, which would explain the better offensive results against him this month, and an extra day of rest somewhere at the end of the regular season could help him.  We've already seen it work for Phil Hughes and CC Sabathia this season.  No reason to expect it wouldn't be beneficial to the 37-year-old Kuroda.

I was stoked for Robbie to make a serious run at the AL MVP after the All Star break, and for whatever reason it just hasn't materialized.  He had a solid July (.360 wOBA), a very good August (.373), and has completely fallen off a cliff here in September.  In 98 plate appearances, Cano's monthly slash is .224/.327/.376, good for a .305 wOBA and the distinction as his worst month of the season so far.  He's still got time to turn those numbers around and boost them back up over the output from his equally weak April, but Cano's slow fade into irrelevance in the middle of the Yankees lineup has been problematic as the Yankees have played close game after close game, and would be a much bigger story if the team hadn't won 13 of 18 games.

Cano always hits his fair share of ground balls, but this month he's hit a lot of them to the right side of the infield.  He's also seen his LD rate plummet to a season-low 18.6%, with the bulk of those hits transferring into the FB category (31.4%).  With Cano not generating much by way of power and productivity with this contact, it's safe to say that his problems with pulling off the ball and rolling grounders over to the right side are also translating to the flyballs he hits as well and turning them into lazy outs.  The Yankees were counting on Cano to help pick up the slack when Teix went down and A-Rod came back, and it just hasn't happened.  Some work with Dr. Long in the cage to straighten his swing out before the end of the year should be a must for him.

With each passing day, the status of Teix and his calf seems to become cloudier and cloudier.  He's down in Tampa rehabbing right now, and the recovery process from his second calf injury is predictably going slowly.  He can run the bases, but not full speed; he can field his position, but not at full speed; he can take BP, but not at full speed.  This is absolutely what has to be done to make sure that everything with his calf is good to go before re-inserting him into the lineup, but the continued uncertainty surrounding his condition and the lack of timetable for his return makes creating lineups and managing the platoon-heavy bench situation that much more difficult for Joe.

When Teix is in the lineup, the Yankees know who their first baseman is going to be every day and who their right fielder is going to be every day, and there isn't nearly as much late-game mixing and matching with the bench.  Without him, those positions remain in flux based on pitching matchups and whoever is swinging a hot bat at the time.  Swish has turned things around in the last handful of games, and Raul Ibanez is suddenly useful again, but both guys have been incredibly streaky.  A return to a stable, consistent day-to-day lineup would be preferred, but there's been no indication that Teix's return to provide that stability will be happening any time soon.
Posted by Unknown at 5:16 PM