2012 AB4AR Season Review: What We Thought We Knew & What We Learned (The Rotation) 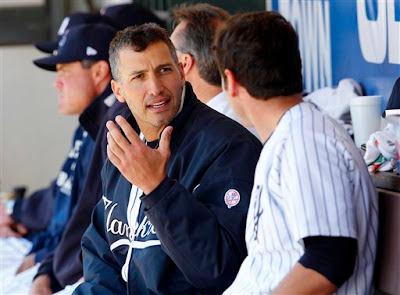 Starting pitching has been a tricky thing for the New York Yankees over the last 5-10 years.  Despite their best efforts, they haven't built rotations good enough to truly compete for World Series championships.  In 2009 they had just enough to get by, but for the most part the constant theme has been that when push comes to shove, the quality of the Yankee starting pitching wasn't on the same level as the quality of their offense.  Improving the rotation was right at the top of the priority list heading into this season, and great steps were taken to try to build up a better staff capable of being good over the long haul of a regular season and postseason.

In previewing what was known and unknown about this group, there was cause for optimism as it appeared the Yankees' plans to build depth and depth of talent were carried out successfully.  But as we've all learned at various times in our own lives, sometimes even the best-laid plans don't work out.

Cash is always in the market for starting pitching, and he did a pretty damn good job of building a lot of depth before this season. The Yankees entered Spring Training with CC Sabathia, Phil Hughes, Ivan Nova, and Freddy Garcia returning, Hiroki Kuroda, Michael Pineda, and Andy Pettitte joining, and the Minor League stable of David Phelps, Adam Warren, and Manny Banuelos stashed in Triple-A in case of emergency. They had righties and lefties; they had power pitchers and finesse pitchers; they had old guys, young guys, and guys right in the middle of the age spectrum. They should have been covered for every conceivable situation that could arise during the season.

And it’s a good thing Cash built all that depth because every conceivable situation came up at some point. Multiple guys got hurt, some for extended periods of time. Pineda suffered a season-ending injury before he even got to throw one regular season pitch, which threw a bit of a wrench into the rotation plans to start the season because Andy wasn’t going to be ready until May. Nova had big-time regression problems and probably wouldn’t have gotten the number of starts that he did if the injuries to the rest of the rotation weren’t so rampant, Garcia crashed back down to earth after outkicking his coverage in 2011, and Hughes gave up A LOT of home runs. And yet through all of it, the Yankees still maintained a very good rotation, one of the best and most consistent in the American League, and it was all because of the depth they built. No matter how many times it gets said, it still rings true; you can never EVER have too much starting pitching.

What We Thought We Knew- There Was A Stabilizing Veteran Presence

The biggest unknown heading into the season was how the young group of starters would perform in 2012. Hughes was a lost cause in 2011 thanks to his shoulder problems, there were questions about Pineda’s weak finish to the 2011 season and how he would hold up in 2012, and Nova was a prime candidate for regression. CC, Andy, and even Kuroda were going to be looked to as the rocks of the rotation, guys who the team could at least count on to go out and provide innings even if they weren’t at their best. Andy was an unknown in his own right after being away from the game for over a year, and Kuroda had questions about his “NL West to AL East” transition, but as older, more experienced pitchers, these guys always come with a bit of added comfort from that experience.

Not only did those 3 stabilize the rotation with their veteran presence, they flat out carried it with All Star-level pitching. CC, despite his injuries, still put together another solid all-around year and still pitched 200 innings. Late in the season when the Yankees needed a starter to step up, he put the team on his back and single-handedly won a couple of key games. Kuroda made all those who worried about his transition to the AL look absolutely foolish by being the healthiest, most consistent, and for most of the season the best pitcher on the staff. At 37 years old, he had the best season of his Major League career and would probably be in the back end of the Cy Young discussion if his offense would have gotten him a few more wins. And Pettitte just continued to age like a fine wine, striking out more batters and flashing better command of his arsenal of pitches than we saw from him in ’09 and 2010. The younger guys all had their problems, and it was the veterans who went above and beyond to pick up the slack.

Behind the scenes of the formation of the 2012 rotation was the pre-planning for the 2013, 2014 rotations and even future rotations beyond that. The $189 million payroll goal for 2014 was going to make it very difficult for the Yankees to build a rotation with big free agent splashes, so they needed to get some young, cheap pitching involved. That was the reason for the Pineda trade, and that was why Hughes and Nova were back with guaranteed spots to start this season. With CC under contract for the foreseeable future, Pineda and Nova under team control, and ManBan primed to get worked into the mix, the Yanks were hoping that 80% of that 2014 rotation was already in house and that 2012 would be the start of the transition towards that younger future nucleus.

What We Learned- That Whole Plan Is Out the Window

To say that things didn’t exactly work out that way would be a huge understatement. The plan went down in flames, plain and simple. Pineda missed the entire season with the labrum tear and is now looking at a June 2013 return to full game action. It’s not yet known what kind of a pitcher he will be when he comes back and how close he can get to being the pitcher he was. ManBan missed the majority of the season with elbow problems in the Minors, and his 2013 is now entirely washed out by his upcoming TJS. Nova was the only young piece that contributed this season, and his 2012 campaign was beyond rough. The Yankees got so little from this young future core that they’re going to have to be seriously involved in trying to get Kuroda and Pettitte back for 2013. Where they go after that is still a mystery.
Posted by Unknown at 12:00 PM