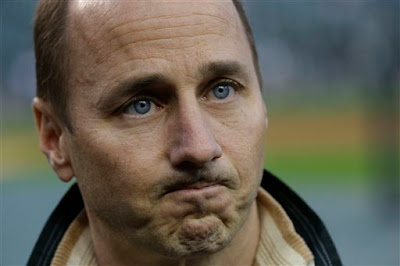 (The Cash does not abide.  Courtesy of the AP)﻿

With the shock and disappointment of the Yankees being swept out of the ALCS still fresh, there has been a fair amount of updates, stories, and rumors already coming out relating to this team.  Who's staying, who's going, who's on the hot seat?  Almost any question you could ask has already started to be answered in the last day and a half since the final out of Game 4 fell into Prince Fielder's glove.  Before we finish up looking back on the ALCS and the season that was, and start looking ahead to what the 2012-2013 offseason has in store, let's quickly reset what's happened in the last few days.

- Derek Jeter is scheduled to have surgery on his broken ankle and ligaments today, with the recovery time still estimated at 4-5 months.  Depending on how quickly he heals, Jeter might be looking at a very short Spring Training and possible delay to the start of his 2013 season.

- Andy Pettitte told reporters after Game 4 that he still had to make a decision on whether or not he's planning to come back in 2013, and that he wanted to make the decision within the next month.  Hopefully Andy still has the itch, because the Yankees could use him next year.

- Alex Rodriguez also told reporters that he wants to stay with the Yankees and that he expects to be back with the club next year.  To a man, the front office has denied that there is anything to the "A-Rod to Miami" rumors, but you have to think the team would at least entertain offers if there are some out there to be had.

- Jon Heyman reported on the 2 biggest stories in the outfield yesterday, confirming that the Yankees will pick up Curtis Granderson's $15 million option for next year.  As a big a step as he took back this season, $15 mil is still good value for the MLB HR leader since 2011.

- Heyman also reported that it was "extremely likely" the Yankees will make a qualifying offer to Nick Swisher this offseason.  Smart move to ensure they get draft pick compensation under the new FA rules, but also a sign that the Yankees more than likely will not offer Swish a new multi-year deal.

- Last on the Heyman front, he talked to Brian Cashman and Cash said that "all the coaches are safe" as far as he was concerned.  Talk had been swirling about the safety of Joe's job and Kevin Long's job, but all indications right now are that they won't be on the chopping block.

- Speaking of coaches, Tony Pena interviewed for the open Fraud Sawx job earlier this week, a position he's unlikely to get as the team seems set on bringing Toronto manager John Farrell back.  George King and Dan Martin of The Post reported that Toronto has shown some interest in third base coach Rob Thomson as a possible replacement for Farrell.

- Marc Carig reported that CC Sabathia will have his left elbow checked again this offseason to make sure everything is OK there.  CC didn't look to have any elbow issues in Game 4, but after hitting the DL with problems earlier in the year it makes sense to take this precaution.

- Play has started in the Arizona Fall League, with Slade Heathcott, Austin Romine, and David Adams putting up some good showings early and Dellin Betances struggling in relief.
Posted by Unknown at 9:52 AM