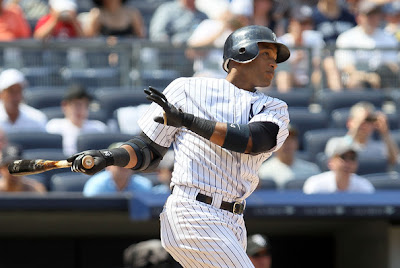 While Eric Chavez, Derek Jeter, and Nick Swisher have been carrying the offensive torch for the last week plus, the keyest of key middle-of-the-lineup bats, Robinson Cano, has been in a serious slump.  With A-Rod already on the shelf, Teix back nursing his wrist injury, and C-Grand only recently starting to break out his own slump, the middle of the lineup could really use Cano's production and has been a bit suspect without it, even as the Yankees have gone 6-3 in the 9 games since Cano started struggling at the plate.  In those 9 games dating back to August 11th, Cano is just 2-24 with 2 R, 2 RBI (none since 8/12), 5 BB, and 6 K.  What's been going on with Cano during these 9 games that killed his offensive momentum so quickly?  Let's take a look.

The spray chart above shows an above-average amount of groundball outs for Cano, a sure sign that something is amiss with him at the plate.  His contact splits for the month, even going back to include his numbers from earlier in August when he was still hitting, support this idea.  Cano's 56.6% GB rate is the highest he's had this season, and both his LD and FB rates are way down as a result.  .As a free swinger, it's easy to assume that Cano has become a bit too over-aggressive and has taken some bad swings at bad pitches to hit, but his strikezone charts don't exactly support that.

The strike zone plot and Cano's take pitch plot show that he hasn't been battling a wide strike zone or really forcing the issue at the plate by swinging at pitches off the corners.  Cano's 5 walks in this small sample size, and 7 for the month in 71 PA, indicate that he's not not seeing pitches or guessing wrong or just plain pressing.  If it's off the corners or up in the zone, Cano is generally laying off it and waiting for a better pitch.

The collection of swings at low pitches shown in the third graph is what stands out to me.  That's a lot of offspeed stuff way down in the zone, not great pitches to hit, and when paired with Cano's spray chart and contact splits, it suggests that something is off with Cano's approach and swing at balls down in the zone.  He doesn't really have a chance to drive those pitches and it seems like he's getting out in front of them a bit and just beating a lot of them into the ground, which is exactly what the opposing pitcher wants to see.  There are also a lot of good pitches to hit up in the zone that Cano hasn't done much with, a sign that he isn't squaring the ball up the way he normally does.

Last night there were some encouraging signs late in the game.  After striking out in his first 2 PA, Cano hit a solid base hit back up the box against Josh Beckett and drew another walk.  The continued walks are always a good sign from Cano, and a sign that he's not completely lost at the plate right now.  If he can fix his swing a little on low pitches to try to hit the ball more squarely, and lay off some of the junk that's way down in the zone, Cano can put himself into better hitting situations and hopefully get some more pitches to drive to hit his way out of this slump.

(All graphs and charts courtesy of Texas Leaguers)﻿
Posted by Unknown at 11:30 AM