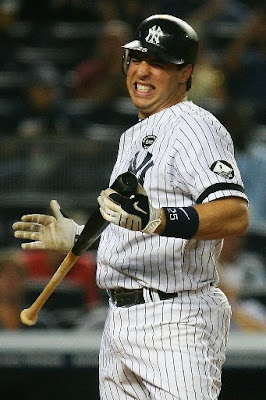 (Something tells me that AB didn't go well.  Courtesy of Getty Images)

Mark Teixeira is an interesting topic of discussion for me.  I've loved the guy at times, and I've hated the guy at times.  I've preached patience with him, and I've called him out for his lack of production this season.  A few weeks ago, Mike Axisa of RAB commented on the adjustment Teix made in his approach in mid-May during his 3-game rest to finally rid himself of his vocal cord ailment, scrapping the more-balanced swing approach he entered the season with and returning to his pull-happy ways, and the results generated by the adjustment.  At the time of Mike's post, it appeared that Teix was swinging the bat well, but when you look at the big picture, Teix's overall performance this season is down from what we can all agree was a subpar 2011.  Something's not adding up here.


April was a rough month for Teix.  He hit just .244/.290/.395 (.300wOBA), and the balanced swing seemed to be doing more harm than good.  His May wasn't going much better, as he was sitting .228/.283/.386 when the decision was finally made to rest him and at least attempt to get over this vocal cord infection/cough thing.  After that weekend series, Teix responded very well to the time off, racking up 13 hits (4 2B, 4 HR), 8 R scored, 10 RBI, and 6 BB in the final 10 games of the month to raise his final May slash line to .269/.349/.548.  It was during his 3-game break against Cincy that Teix apparently made the call to abandon his new approach and go back to the power-heavy pull approach that he was more comfortable with.

Using that pull approach, Teix posted a pretty blah .219/.319/.406 line in 116 plate appearances in June, a body of work not much more productive than what he did in April.  A season-low .224 BABIP was probably a contributing factor, but in the biggest sample size of the season to date, using the approach that he said he was more comfortable with and felt better about, Teix just didn't deliver.  Which brings us to July, where in the 8 games the Yankees have played Teix is currently 8-25 with 5 XBH, 8 R, 10 RBI, and 7 BB.  His 1.189 OPS and .497 wOBA for the month are much more encouraging signs that Teix is starting to put things together as we move towards the 2nd half of the season.

And yet, going back to the big picture, Mark Teixeira is currently hitting .250/.334/.473 with a .346 wOBA and 115 wRC+.  His BB rate (10.7%) is the lowest it's been since he first put on a Yankee uniform and with just 15 HR he is on pace for his lowest output in that department since he hit 30 in 2007.  The question has to be asked; who is the real Mark Teixeira?  And what can we expect from him moving forward this season?  He's been really good for stretches and completely pathetic for stretches, and as I mentioned last Friday, I still question whether his stubborn commitment to his pull-happy approach is the right tactic.  Robbie Cano can only carry the offense by himself so much.  Teix being CONSISTENTLY productive and more productive than he was in the first half will go a long way in improving the overall production of the lineup through the remainder of the season.
Posted by Unknown at 1:04 PM

That's an option. Not one that I or the Yankee front office would entertain, but still an option.