Batting from the left side, Teix currently sports a 14.3% BB rate, 5 walks in 35 plate appearances, and an 11.4% K rate (4 K).  If you're keep scoring at home, that's more walks than strikeouts.  Both of these rates are improvements from where they were last season (11.6% and 18.3% respectively) and combined with an increased pitches/PA from the left side (4.16) suggest that Teix is being more patient at the plate from the left side and seeing the ball much better.  Too many times last year it seemed as though he were letting good pitches go by and getting beaten by swinging at bad pitches when behind in the count.  That isn't the case so far this year.

The changes in contact splits also suggest an improved approach by Teix from the left side.  His LD rate as a lefty (24.0%) is up from last year's 17.7% rate, which happened to be the 2nd lowest of his career.  He's also cut down his FB rate, which was sneaking up to near 50% over the last 2 seasons, to 36.0%, suggesting a more even and level swing from the left side compared to the long, looping uppercut that had become the norm in 2011.  Teix is also using the whole field better from the left side, hitting 10 of the 25 balls he's put in play to either center or left field, including a couple of well-struck line drives last night.  We probably don't want to see Teix with a GB rate of 40.0% all season, but the much more even distribution of contact is a positive sign and a call back to Teix's most productive days at the plate.

Even eliminating the numbers and going just on the eye test, Teixeira looks better from the left side.  His batting stance is not nearly as open as it's been the past few years, with his front leg much closer to the plate and the rest of his body than the outside of the batter's box: 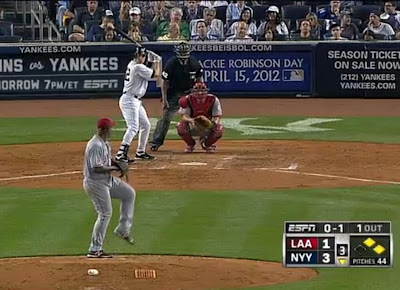 For the sake of comparison, here's last year's stance: 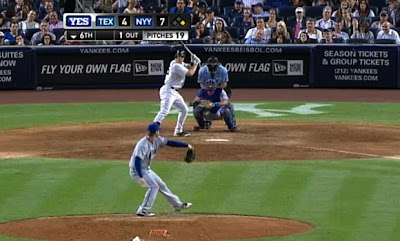 (Also courtesy of MLB.com, by way of RAB)

His swing also looks much more fluid and smooth than last year.  Last year it looked like he was lunging at pitches and swinging harder than he had to, most likely drawn by the allure of the short porch in right.  The overly-aggressive swing and pronounced upper cut were surely major factors in the abundance of pop-ups we saw.  This year everything looks balanced and together, and the swing shown above in the first picture is a perfect example of that.  Watch the entire swing here and notice that Teix's entire body motion is much more calm and in tune.  His hands and hips are in sync, his upper body motion is perfectly balanced with his lower body motion, and the result is a line drive RBI double to right.  He doesn't appear to be swinging for the fences right now; he appears to be swinging to make solid contact.  And when you do that, good things are going to happen.

Now I'm not a professional hitting coach and I don't pretend to be, but from what I've seen from watching live and what I see in the early numbers, I don't feel like there should be concern about Teix's slow start.  He's a notorious slow starter anyway, and he's likely still getting acclimated to this new swing and new approach from the left side of the plate.  The fact that he's taking pitches, seeing the ball, and making good contact while doing so makes me thing it's only a matter of time until the power starts to catch up.
Posted by Unknown at 9:30 AM