Yankees At The Break- Looking Back 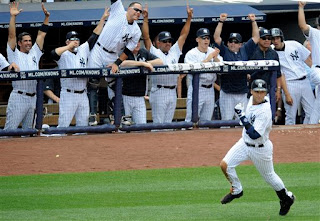 (Easy choice for best first half moment, no?  Courtesy of The AP)
The Yankees started the 2011 season, like most years, with a multitude of questions surrounding their team.  And, like most years, the main questions were related to the pitching staff.  After being stiffed by Cliff Lee for Philly, the Yankees were left without a viable option to replace the retired Andy Pettitte in the rotation.  Rather than reach on the rest of the overpriced, undertalented trade and FA markets, the Yanks made do with an internal promotion (Ivan Nova) and a couple of cheap scrap heap options (Bartolo Colon and Freddy Garcia) who weren't expected to do much more than steal innings until another young Triple-A pitcher was ready.

As luck would have it, those 3 would turn out to be much more valuable to the rotation and the team in the first half than the likes of A.J. Burnett and Phil Hughes.  Burnett has been better than in 2010, but still hardly worthy of the type of money the Yankees are paying him, and Hughes, after a career high workload in 2010 came out of the gate with no velocity and no movement on his pitches to start 2011 and was quickly shelved for almost the duration of the first half with shoulder inflammation.  In Hughes' absence, Bartolo Colon has been a leading candidate for Comeback Player of the Year, posting a 3.20/3.56/3.19 line in 90 innings, good for 1.6 WAR.  Nova and Garcia have also been more than serviceable, pitching 183.2 innings in 31 combined starts and picking up 15 wins and 2.1 WAR.  Not Cy Young worthy to be sure, but definitely better than anybody anticipated, as evidenced the team's 9th ranked 3.46 ERA.

The anchor of the rotation, as usual, has been CC Sabathia.  If the talks of his possible opt out after the season are distracting him, he certainly isn't showing it as he current holds a 2.72/2.50/3.09 line in 145.2 IP, good for an MLB leading 13 wins and an AL leading 4.8 WAR.  If there was any internal doubt about whether the Yankees should re-sign him if and when he opts out of his current deal, Sabathia has all but erased that with his tremendous first half.  Looks like cutting the Captain Crunch out of his diet really paid off.

The offense, expected to have fewer holes and question marks than the rotation, has actually underperformed a bit despite being 3rd in baseball in runs scored, 2nd in OPS, 2nd in wOBA, 2nd in wRC+, and 1st in HR by a wide margin.  The Yankees currently have 4 players with 50+ R and 50+ RBI apiece at the break (C-Grand, Teix, The Horse, and Cano), the first time that's been done by a Yankee team since the late 30s, but save for Granderson you could make the argument that each of the other 3 is having a "down" year.  Early struggles by older players like Jeter and Jorge Posada also didn't help matters, nor did April slumps for Nick Swisher and Brett Gardner.  All 4 of those guys have rebounded since then, but with The Horse's injuries, Teix's inability to hit anything other than a HR, and Cano's refusal to take pitches, there are still improvements that can be made.

Offensively, the MVP has been Curtis Granderson.  A year after flailing through the first half of the season and having his swing completely rebuilt by Kevin Long, Granderson is putting up numbers that have him on pace to shatter all his previous career highs.  He is tied for the team lead with Teix with 25 HR, has 63 RBI from the 2-spot in the lineup, has scored an insane 79 R, and currently leads the Yankees in SLG, OPS, wOBA, wRC+, and WAR.  If the consistency he has shown would have been matched by a few more of his teammates, we would likely be talking about the clear cut #1 offense in baseball.

More than the hitting exploits of C-Grand, the pitching greatness of CC, or the surprising performances of Colon and Garcia, the biggest talking point for the Yankees in the first half was injuries.  To date, the Yanks have had Jeter, A-Rod, Russell Martin, Eric Chavez, Rafael Soriano, Joba, Pedro Feliciano, and Damaso Marte miss significant portions of time because of injury, with Swish and Mo also missing a few games recently.  The majority of the bullpen guys won't be back this year, which makes the jobs Mo and Dave Robertson have done that much more important, but with A-Rod now on the shelf for the next 4-6 weeks Joe and Yankee fans everywhere need to start saying their prayers that the rest of the team can stay healthy.

All things considered, the first half of 2011 has to be considered a success for the Yankees.  With the injuries they've suffered and the guys they're rolling with in the rotation, one would certainly not expect to be sitting 18 games over .500 at the All Star break, but that's exactly where they are.  And with the Phil Hughes injury, the CC opt out talk, the plague of bullpen injuries, the Jorge "day off" saga, and the recent Jeter march to 3,000, there has been no shortage of storylines/distractions along the way.  Now they need to regroup, rest up, and start getting healthy for the stretch run in the 2nd half.
Posted by Unknown at 7:47 AM