Derek Jeter And The Meaning Of 3,000 Hits 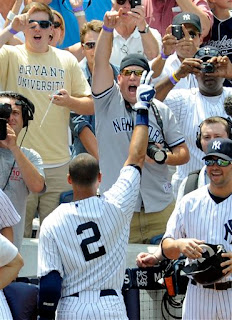 (Courtesy of The AP)
I wanted to wait a little while to write this post.  Typically, something that historic being done by a Yankee warrants immediate commentary, but in this case I needed time to collect my thoughts and really think about what I have to say.  And even now, as I sit here at my desk, I still don't even know the right way to talk about this, so it will still just come out as a rambling mess but here it goes.

As a Yankee fan, Derek Jeter has always been and  will always be my favorite player, and I don't think it's a stretch to say that would be the case for many other Yankee fans from my generation.  He is our Thurman Munson, our Mickey Mantle, our Joe DiMaggio.  Years from now, when I'm talking to my kids and grandkids (assuming a member of the female gender is unfortunate enough to procreate with me), I won't be telling them about Nick Swisher's exploits in right field or how underrated a player Tino Martinez was during his time in pinstripes.  I will be talking about watching Derek Jeter play and how good a player he was, plain and simple.  So to have those feelings as a fan makes something like what Jeter accomplished on Saturday even more special.

And the statement that Derek Jeter was/is a very good baseball player, regardless of what all the Jeter haters out there want people to think, is a fact.  And his reaching 3,000 career hits and beyond on Saturday afternoon is a testament to that.  Out of all the men who have played professional baseball in history, only 28 of them have ever achieved 3,000 hits in their career.  It is not something that can be easily accomplished.  It takes an almost perfect combination of career longevity, closely tied to healthy and injury luck, and consistent upper level baseball skill.  There is no way to luck into 3,000 hits.  You have to be a damn good hitter to do that.  And the plain fact of the matter is that Derek Jeter has been a damn good hitter for almost his entire career.

Since '96, Jeter has put up 200 or more hits 7 times.  He has put up 190 or more 10 times.  180 or more 13 times.  His 3 lowest hit totals are 179 (2008), 179 (2010), and 156 (2003, the year he missed 44 games).  He has hit over .300 11 times, and the only other season he hit below .291 was last season.  Even with 2010 and 2011's totals included, Jeter's career tripleslash line is .313/.383/.449, with a .369 wOBA and a 124 wRC+.  That right there is a perfect demonstration of the career longevity and consistent upper level baseball skill needed to reach 3,000 hits.  It can't be overrated and it can't be overstated.  You simply have to be very good at hitting a baseball to amass numbers like that, and the fact that hitting a baseball is a very difficult thing to do by itself and Jeter is so good at it is undeniable.  Say what you want about his fielding or the constant gushing over his "intangibles," but you can't argue with the results he has produced at the plate.  The numbers are there, they are tangible, they paint the picture.  And it doesn't take a statistical genius to recognize that the picture painted by those numbers is one of a great hitter.

At his best, Jeter could hit almost any pitch to any part of the park.  He could go down and get the low and inside pitch and yank it into the left field corner or in the gap for doubles.  He could reach out and poke the outside pitch into right field for base hits.  He could pull his hands in and inside out the hard inside pitch for base hits to right (I still say those types of hits should be called "Jeters").  And if the pitcher caught too much of the plate right around the middle, he could drive the ball back up the box for a single or into the right field for a double or a homer.  It wasn't out of the ordinary for Jeter to have a 3-hit game and have all 3 hits go to completely different parts of the park.

For me, the best part of Jeter's approach at the plate has always been the fact that it looks like he really doesn't have an approach when he's up there.  Jeter never tries to do too much at the plate, never tries to hit the ball here or there.  He simply does what the pitcher allows him to do.  It takes a special kind of player to have that skill set and be confident and flexible enough to adapt to the situation presented to him, even if it's pitch-by-pitch.  By not getting bogged down with the situation, Jeter left himself with the whole field to play with, and he was more than willing to use it.  He wasn't just a dead pull hitter, or a "go the other way" guy, or a home run hitter, or a singles hitter.  He was just a hitter.  Even today, you can still see that same approach to his game, even as the skills it takes to benefit from that approach have deteriorated.

And even though people might not like to hear it, the fact that Jeter has done it in a Yankee uniform, as the face of the most famous franchise in American sports, does make it a little more special.  The long line of Yankee greats, despite all their stats and accolades, has never had a 3,000 hit player amongst their ranks.  For Jeter to reach that level that had yet to be reached by all those greats before him puts him right up there amongst the greatest Yankees of all time.  He has the rings, he has the moments, and now he has the personal statistical achievement to tie a bow on what has been an incredible career.

I play up the fact that Jeter is severely diminished at this stage of his career and joke about his incredibly high GB rate for the sake of the blog.  It's a fact, and it has to be talked about as such.  But that in no way diminishes what Jeter has done since taking over as the everyday shortstop for the Yankees back in '96 or diminishes the way I feel about him as a player.  He has been a consummate professional since Day 1, and like it or not, he has been a GREAT baseball player.  He may not have hit as many home runs as A-Rod, or been as "pure" a hitter as Nomar, but he has been the most consistent hitter of the last 15 years, and his numbers support that.  I was a horrible baseball player growing up, but I always envisioned being the type of player that Jeter was.  I wanted to picture myself making the jump throw from short, I wanted to picture myself getting the clutch hit in the 9th to win the game, and I wanted to picture myself getting 3,000 hits in front of the home fans on a home run.  Jeter got to do all of that, and it can't be taken away from him.

Derek Jeter is one of only 28 players to ever reach 3,000 hits in his career.  He is the only Yankee to ever do it.  People can rag on his defense, complain about all the hype he receives, and criticize him for how he handled his recent negotiations, but nobody can deny the legitimacy of his 3,000 hits.  From here on out, he will always be attached to that record, just like he will be attached to his 5 rings and "The Flip" and "The Dive."  It's the final piece to his legacy.  It cannot be tarnished by anything that he will do over the rest of his playing career.  No one will look back and say that Jeter wasn't any good in 2011 or 2012.  They will look back and say "there's Derek Jeter.  The only Yankee to ever reach 3,000 hits." And that is something special, both for Jeter and for the fans like me who gained such joy from watching him play.
Posted by Unknown at 12:41 PM