I Wish I Was As Positive As Nick Swisher 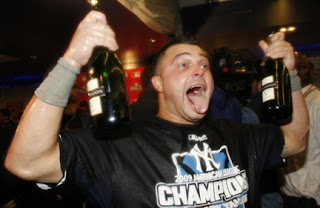 (We need this guy back again.)
There's no other way to say it than to just state facts and say that Nick Swisher has sucked the big one so far this year.  His wOBA currently sits at .291, he's hitting .171/.296/.220 with RISP, and his OPS of .633 is actually lower than the Jorge/Jeter standard of sucktitude right now.  And while he hasn't been selfish enough to flat out refuse to play when demoted in the lineup, he has been benched for the last 2 games for Chris Dickerson.  If I were doing that poorly at my job that my manager asked me to not come into to work, to stay at home while they brought in a college intern to handle my responsibilities, I'd be looking at life through the haze of a case of Miller Lite right now.  But not Swish.  The dude is just too damn positive for words.

“It kind of seems like when you’re struggling, it seems like a lot of people have opinions on what you should do and what you shouldn’t do.  But I know my guy’s K-Long, and he’s going to tell me everything I need to do. I know if I listen to him and do the things he tells me, I’ll be right back where I need to be...

Whether I get to the same numbers I did last year, I’m going to bust my ass to get back there, and more.  That’s kind of my philosophy all the time. Sometimes you run into rough patches, and you learn a lot about yourself. I’m going to keep grinding, keep fighting, make sure I get weights in, make sure I’m getting my extra hitting in, doing all the things I have to to make myself better.” (quotes via LoHud)

And that right there is why I can't hate on Swish for being so terrible this year, as much as I'd like to.  He doesn't make excuses, he doesn't feel sorry for himself, and he doesn't spit the same tired old cliches back at you that Jeter would if he were the one struggling.  He stays positive, puts his work in, and waits for his chance to redeem himself.  And he still never takes a play off when he is in the lineup.  Dude is out there giving it 100% every day.  Good for you, Swish.  Hopefully we see you back in the lineup tonight and hopefully you get a few hits to start getting back in a groove.  For the sake of your 2012 option, you better.
Posted by Unknown at 12:33 PM