A Perfect Comparison For The Yankees Right Now 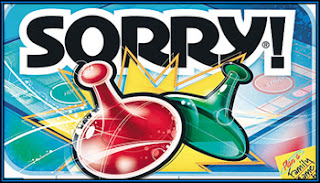 (No, that's not the cover of Joe's bullpen binder.)
Everybody remembers playing the board game "Sorry!" as a kid, right?  Did anybody else get as frustrated as I did trying to play that?  It seemed like a game of strategy and planning, where if you made the right calls here or there you could win easily.  But it basically came down to a game of random luck because of the cards you had to draw.  Sure, you could try to move a piece around quickly after drawing the 2 and then an 11 on your draw again, but then you could get caught up with a 3, a 1, and the dreaded 4 (which you had to move backwards) on your next 3 draws.  You could try to leave a piece right on your start area after taking it out and hope to get the 4 to move back and set yourself up to get into the safety zone, but then the 4 would never come.  Everybody else would get the damn things and eventually you would have no choice but to start moving the piece around the board because you were out of options.  And even when everything looked like it was falling your way, you had 3 pieces in Home and the 4th just outside the Safety Zone, you would get screwed on a draw where you drew too high to move the piece in and sure enough, the next player drew a goddamn "Sorry!" card and kicked your ass back to start.

That's kinda what the Yankees are right now; a game of "Sorry!"  They look like they have all the pieces in place and when things are going their way they look great.  But then they hit a rough patch of bad cards (failure to get hits with RISP, bullpen blowing leads, errors in the field) and suddenly they're losing games that they should have won.  They get a killer 2/12 combo to move a piece way out around the board (big 1st inning), and then slowly move the piece all the way around because of bad draws (GIDPs, pop ups on the infield by Teix, Cano swinging at the first pitch).  And then sometimes out of nowhere, they get 4 or 5 good draws in a row and the game is over before you know what happened (8th inning against the Mets on Sunday).  Whatever the situation is, it's been a frustrating series of inconsistencies, bad luck, and bad strategic moves that has the Yankees unable to establish a solid winning streak.  And don't even get me started on Joe and his inability to properly split a 7.

P.S.- Just to keep this analogy going a little longer, Colon's implosion in the 6th inning last night was the equivalent of having somebody pull a "Sorry!" card on you late in the game when you're the only piece on the board and they have the only piece still in the start area.  Just devastating.

P.P.S.- Why were there no 6s or 9s in Sorry!?  What was that about?  Were they really that worried about people being confused?  Can't tell you how many times I could have moved from just outside the Safety Zone straight into home if I could have drawn a damn 6.
Posted by Unknown at 7:15 AM

Ha, this is a pretty spectacular analogy.