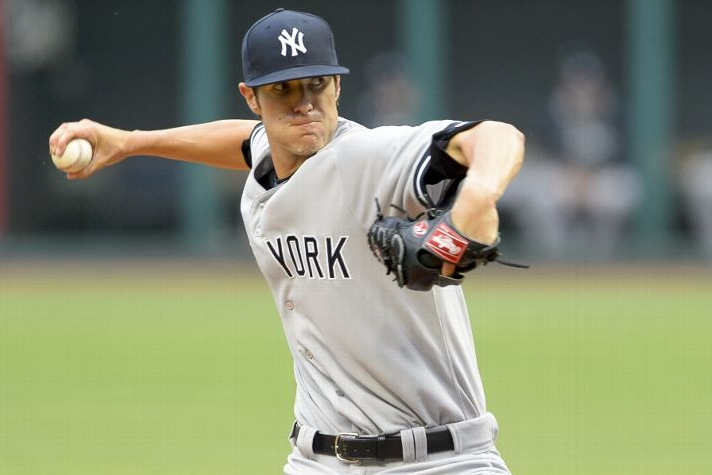 In Spring Training, Shane Greene drew some attention for how well he pitched.  While the overall SSS numbers weren't sparkling (4 ER, 8 H in 7.2 IP), Greene did strike out 10 batters and show the kind of stuff capable of getting Major League hitters out.  Working exclusively in a relief role and then getting shuttled between Triple-A and the Majors early in the regular season in that same role got him off kilter, as did an early injury, and his results once he returned to his regular starting role weren't that impressive.  He was consistently inconsistent at best and mildly disappointing at worst.

Since the middle of June, however, it's been a different story.  Greene allowed only 6 ER over 28 IP in his last 5 Triple-A starts with 23 strikeouts and 10 walks, and after Masahiro Tanaka went on the DL with his UCL tear it was Greene who got the call as his replacement in the Major League rotation.  All he did this past week in his first 2 Major League starts was throw 13.1 innings of 2-run ball with an 11/2 K/BB split and pick up the win in both starts.  Not bad for a guy who wasn't much of a thought as a legitimate organizational prospect before the start of last season.


The secret to Greene's success has been his sinking 2-seam fastball.  He's thrown it 77 times over his first 2 starts, almost 40% of all his pitches, and it's served him very well.  As you can see from the pitch location plot below, Greene has done an excellent job keeping his sinker down in the zone and on the corners.  The movement of the pitch is down and in to right-handed hitters and down and away to lefties, and Greene has been able to throw it for called strikes to set up his offspeed stuff as well as use it to generate a lot of groundball contact.  Of the 40 outs he's recorded thus far, 19 of them have come on the ground and the bulk of those have come off the sinker.

What's made the pitch doubly effective is the fact that Greene throws it hard.  Most guys typically offer a sinker up in the 90-92 range, going more for the movement than velocity.  Greene has been sitting 93-95 with it and that extra oomph has made it difficult for hitters to square it up.  Between the movement of the pitch and how quickly it's getting to their hands with the extra velocity, guys just haven't been able to keep up or adjust.  When they do, Greene has been able to mix in his slider and curveball to keep them guessing and some hard mid-90s 4-seamers to keep them honest.

Greene put on an absolute clinic against a very good Baltimore Oriole lineup yesterday, peppering the strike zone early and often with the sinker and then slowly moving towards more offspeed pitches for strikeouts later in the game.  His performance over the last week has been a much needed blessing for a Yankee rotation that's basically on its last legs and a possible "diamond in the rough" option for a rotation that will need more help next season.  He's already earned himself more starts after the ASB and the better he pitches, the more his stock within the organization is going to rise as a real potential foundation piece moving forward.

Obviously there's the "new guy on the block" factor to consider and remember when it comes to this early success.  It wasn't that long ago that we saw Chase Whitley turning in solid to very good outings on the reg when he was called up to fill an injury-opened position.  Recently he was moved back to the bullpen after taking it on the chin a bunch of times in a row and wouldn't be starting tonight if Tanaka was still healthy.  Where Greene differs from Whitley, though, is in the realness of his stuff.  His sinker is really good, harking back to the early days of Chien-Ming Wang's Yankee heydays, and both his slider and curveball have showed swing-and-miss potential.  He's also a natural starter, fully stretched out and capable of going 6-7+ innings and 100+ pitches every time out.

As long as he can keep commanding his sinker, his eventual regression once the league catches up to him should be less severe than what Whitley experienced.  Greene is the latest young Yankee player to capitalize on an opportunity presented to him this season, and he may have the best chance of turning it into something real for the future.
Posted by Unknown at 1:00 PM