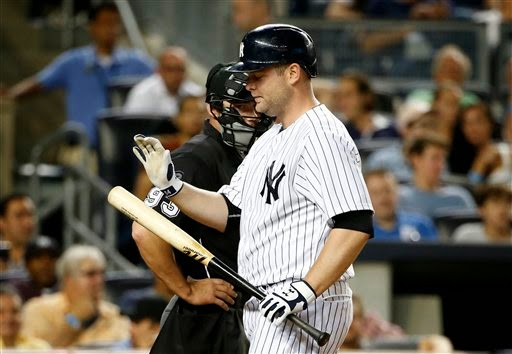 Tinker With The Lineup

This is one that Joe has at his disposal every game.  He was doing more juggling earlier in the year when guys were on the DL, but since Teix and Beltran have come back it's slowed down considerably.  Gardner-Jeter-Ellsbury is pretty well set at the top, Teix in the cleanup spot, Beltran and McCann in the middle, and Roberts and Ichiro at the end.  Derek Jeter is no more deserving of hitting 2nd now than he was last month or in May, but a viable replacement is nowhere to be found now that Yangervis Solarte has gone ice cold.  It'd be nice if Carlos Beltran could settle in there but he has been all or nothing since coming off the DL.

With that in mind, maybe it's time for Joe to get a little more flexible with his batting order based on who's hitting and who's not.  Hit Gardner and Ellsbury 1-2, move Kelly Johnson up a spot if he's drawing walks and hitting for power.  Bat Teix 3rd in favorable matchups to try to get him another plate appearances.  Bump Brian McCann down if he's going to keep swinging like crap and sit him against lefties for Cervelli.  I can't even believe I'm saying this, but maybe hit Brian Roberts 2nd for a game or 2 if he's swinging the bat as well as everybody seems to be saying.  It's worth a shot at this point.

The easiest way to add some new faces (and bats) to the mix would be to finally drop the DFA axe on a few heads.  Maybe Roberts, maybe Soriano.  Both are hitting at a below-average clip and I don't think either would be greatly missed.  A less permanent option would be to send Solarte down to Triple-A, but either one leads to the MiL call up.  There are familiar faces like Zoilo Almonte and Scott Sizemore down at SWB and less familiar ones like Jose Pirela, Kyle Roller, and Zelous Wheeler, all of whom have swung the bat well.  The Yanks have been working guys like Pirela and Wheeler around at different positions lately, a sign that a move may be in the works.  While it's unlikely that swapping any of these Triple-A guys for a Soriano or a Solarte will bring a big boost to the lineup, the Yanks don't have much to lose by taking the chance.  It worked out pretty well for them in April and May when they took Solarte on the Opening Day roster.

This method would require a lot more effort than making a few 40-man roster moves, but it's the one that would bring the greatest return.  The picture of who's going to be buying and who's going to be selling at the deadline has come into focus and there are some attractive options out there for Cash if he can swing a deal.  Guys like Luis Valbuena of the Cubs, Seth Smith of the Padres, and Ben Zobrist of the Rays would be very good matches and would not all come at a steep prospect return price.  Bigger names like Alex Rios of the Rangers or Chase Utley of the Phillies would require a bigger prospect hit, but they would be major upgrades at the positions of greatest offensive need (right field and second base).

The main focus is on the search for rotation help and that needs to be a priority.  But good pitching alone is not going to help this team.  That's been proven the last 2 times Masahiro Tanaka has taken the mound.  The Yankees need to score more runs and the guys they have aren't getting the job done.  There needs to be some serious time spent looking for some trade targets to help improve the lineup.  More runs would help take some of the strain off the undermanned pitching staff.

If they want to return to last season's barrel bottom-scraping ways, the Yanks could scour the free agent wire for a cheap bat or 2.  I doubt they'll find much out there, and if that's the only upgrade they're interested in making to the offense then they're probably better off using their own internal players.  Whatever they do, they need to do something.  Hell, I wouldn't mind if they dabbled in all 3 of those options.  Go nuts.  Anything is better than continuing to watch the sad status quo.
Posted by Unknown at 12:00 PM