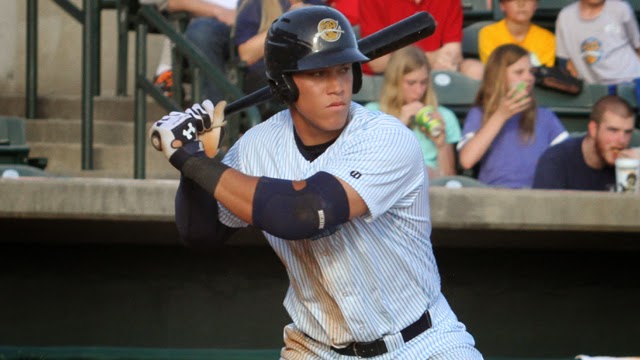 It's Minor League All-Star Game season, which signifies the start to prospect promotion season.  The Yankees have already moved some guys up and down, but once we get through the midpoint of all the MiL seasons, you'll really start to see things pick up.  With that in mind, here are a few updates on some of the top names in the system and the wide disparity in where their seasons are heading at the midpoint.  All things considered, especially some of the more recent negative news, I think you have to say this has been another disappointing campaign for the Yankee system as a whole.  But check out the major "Bests" and "Worsts" after the jump and judge for yourself.

- Luis Severino- Bumped up from Low-A Charleston to High-A Tampa after picking up where he left off last year.  Severino pitched to a 2.79/2.78 split with 70 K and 15 BB in 67.2 IP for the RiverDogs and continues to rocket up the board of top organizational pitching prospects.

- Mark Montgomery- Got demoted to Double-A to clear a roster spot for Wade LeBlanc and was promptly put on the DL there.  The velocity and the command hasn't been there this year for the 2nd in a row and his shoulder and the workload that was put on it in 2012 are starting to become a real concern.

- Slade Heathcott- Played in all of 9 games this year before ending up back in the doctor's office to look at his surgically-repaired knee.  There's been no formal announcement from the team on what his status is, which I'm taking as a bad sign given his length injury history.  Approaching his 24th birthday at season's end, the lights are starting to turn out on him because he can't stay healthy to save himself.

- Gary Sanchez- The production isn't the issue with him, although he's been pretty ordinary in that department as well.  It's the attitude again.  Sanchez was called in for a meeting with coaches last week and has been benched since then for what Double-A manager Tony Franklin called "disciplinary action".  Not what you want to hear about your top prospect who's had problems in this department before.
Posted by Unknown at 5:07 PM