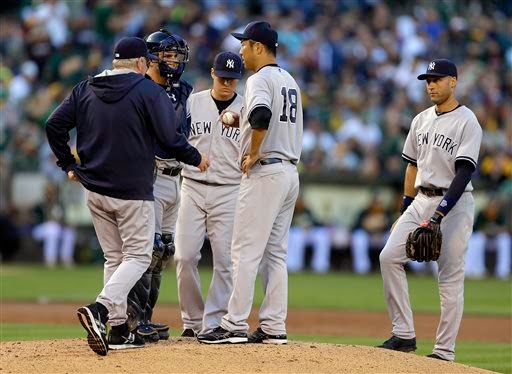 - Johnson: 1-2, 1 2B, 1 R, 1 BB, 1 K.  Got the start at third with Brian Roberts out and was the most productive member of the lineup.  On base twice, had the only XBH, and directly responsible for the best scoring chances had all night.

- Murphy: 0-3, 1 LOB.  The lack of production at the plate was a bummer, but it was the 2 passed balls with runners on in the 5th that really hurt.  Maybe McCann keeps those in front of him and prevents the inning from getting out of control.  Maybe he doesn't.  Regardless, those were the back-breaking plays and the ones that ended Kuroda's night early.

- Kuroda: 4.2 IP, 5 H, 4 ER, 3 BB, 3 K.  Murphy's PBs aside, this was not a good night for Hirok.  He put too many guys on base, threw too many pitches early, and could never find the command he needed to get out the trouble in the 5th.  This is the pitcher he's become, one who's very clearly on or off early in the game and one who's not going to get a long leash anymore when he's off.

Rubber match of this series is this afternoon and it will determine whether this was a really good road trip (6-3) or just an OK one (5-4).  Vidal Nuno and Jesse Chavez are the scheduled starting pitchers.
Posted by Unknown at 8:43 AM