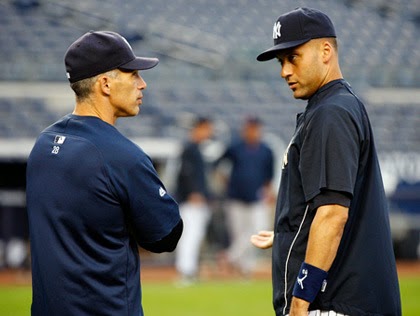 
On April 12th, Jeter was hitting .286/.375/.343.  He looked pretty good at the plate.  Since then he's fallen off and currently sits at .259/.330/.302.  He has 4 XBH for the season and only 1 in May.  He's still hitting second in the batting order when he has no reason to be, and he's getting way too much time at shortstop when he clearly can't play the position anymore.  On the rare occasions when Joe does go to Brendan Ryan for late-game defensive purposes, he does so to put him at first base so Jeter can stay at shortstop.

The only explanation for these things is Joe catering to Jeter and his pride, ego, whatever you want to call it, and in that respect he's playing right into the farewell tour mentality that he talked down last month.  Leaving a player in a position that does not help the team succeed is not managing with the goal of winning baseball games in mind, and sooner or later Joe needs to decide which side of the fence he's going to manage on for the rest of the year.  Jeter means a lot to the game and he does deserve the recognition that opposing teams and their fans want to give him.  What he doesn't deserve is to hit second and play as much shortstop as he has when there are other players on the roster better suited for those jobs.

If the fans are smart enough to give Jeter his standing ovations and cheers early in games, Joe needs to start being smart enough to put him on the bench when it makes sense to late in games.
Posted by Unknown at 12:44 PM