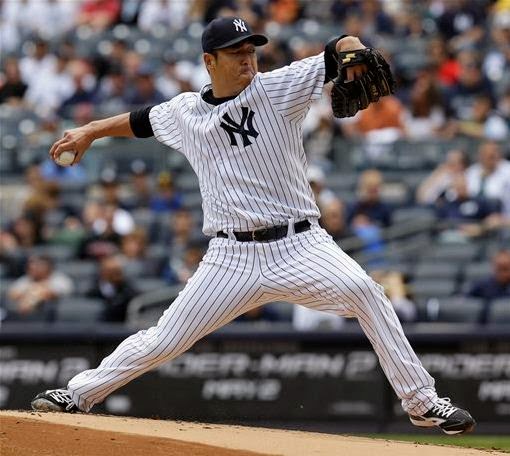 
Hirok had a relatively stress-free start to his outing yesterday.  He gave up a solo HR in the 1st before retiring the sides in the 2nd and 3rd in order.  He was at 39 pitches through 3 innings and looked like he was on track to go 7+.  Then the lineup turned over and Kuroda had to work hard to get through the next 2 innings.  He threw 27 pitches to get through the 4th after loading the bases on a pair of walks and an infield single.  In the 5th, he threw 21 pitches and gave up 2 more runs on 3 hits.  He only needed 12 to get through the 6th, but at that point his pitch count was up to 98 and Joe elected to go with Matt Daley to start the 7th.

Last year, I bet Joe lets Hirok come out to start the 7th.  He's earned that level of trust with what he's done since joining the Yankees.  Deep down, Joe probably wanted to use Kuroda a little more to ease the stress on his bullpen and avoid using guys like Daley in close games.  Joe also knows what a double-edged sword his current rotation condition is when it comes to how he handles Kuroda.  A shorthanded bullpen on a doubleheader day should be textbook criteria for stretching your starter out a little longer than you planned.  But when that starter is 39-year-old Kuroda, that's not such an easy decision.  As important as it is to win games, it's doubly important to keep your 2 healthy starters as healthy as possible and that was the bigger influence on Joe's decision.  That Kuroda would have been facing the guy who hit the HR off him in the 5th to lead off the 7th made the call even easier.

Yesterday marked the 8th time in 9 starts that Kuroda was removed before he reached the 100-pitch plateau.  The only time he exceeded it was on May 6th against the Angels when he threw 108 pitches in 7.2 easy innings.  Kuroda threw 12 or fewer pitches in 4 innings of that game and only 20 or more in the bottom of the 1st.  That seems to be the big determining factor for how long Joe's willing to let him go.  If he's working efficiently and not throwing too many pitches in any giving inning, the 100-pitch mark is more of a guideline.  If he has to exert more effort and up his pitch count with 20-30 pitch innings, 100 pitches is the stopping line.

It's the smart play with Kuroda and a plan worthy of sticking to given all the other injuries in the rotation.  It's also a play that will make it more difficult to keep the bullpen workloads in check.  Glad that's Joe's balancing act to handle and not mine.
Posted by Unknown at 4:00 PM