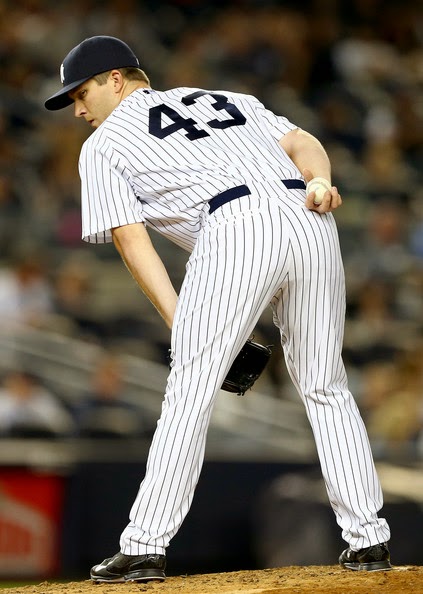 Their appearances this past weekend leave Betances and Warren with 24.1 and 25.0 innings pitched respectively this season, by far the most among Yankee relievers.  Betances' have come in 17 appearances and Warren's in 20.  Based on those current usage paces, Betances projects to make 65 appearances and pitch 91.2 innings this season while Warren projects to pitch 94.1 innings in 76 appearances.  Those IP totals would be the highest by any Yankee reliever in the Joe Girardi era and the 2nd and 3rd times since he's taken over as manager that a reliever has pitched more than 70 in a season.  The only other time was Joba Chamberlain in 2010 and he threw 71.2 innings.  Warren's 76 projected appearances would also best 2010 Joba's mark of 73 and come in 2nd behind 2012 Boone Logan's 80 as the high mark of the Girardi era.

The high volume of innings being soaked up by Warren and Betances draws comparisons to the previous Joe who managed before Girardi and the frightening way in which he handled his best middle relief arms.  In 2006, Scott Proctor made 83 appearances and pitched 102.1 innings for Joe Torre.  The next year he pitched 86.1 innings in another 83 appearances split between the Yanks and Dodgers.  He made just 86 total appearances as a Major Leaguer in the years following '06-'07, none since 2011, and last season he gave up 7 ER and 10 BB in 7.1 IP for the Baltimore Orioles' Triple-A affiliate.  His arm was never the same after that '06 season.

Proctor was 29 years old when he had that monster '06 workload, not too much older than the 26-year-old Warren (who turns 27 in August) and Betances.  With Betances' injury history and the dramatic increase in elbow problems and Tommy John Surgery this season, there should be enough here to be concerned.  The last thing the Yankees need is for more of their younger pitchers to go down with elbow problems.  Even if it doesn't happen now, guys like Ryan Madson and Joel Hanrahan show that heavy workloads can come back to bite relievers eventually.  It may be in Warren and Betances' long-term best interests to not be used so much so early in the season.

Of course, it's understandable why Joe would go to Warren and Betances so much.  The D-Rob and Kelley injuries have left him without his top 2 guys for the majority of these first 43 games, Matt Thornton continues to get exposed for not being the pitcher he used to be every time he has to face a right-handed hitter, and it's been shown time and time again that the drop-off from the Warren/Betances duo to the level of middle relievers below is a major one.  Joe's number 1 job as manager is to win ballgames and he has a better chance of doing that with Warren or Betances on the mound rather than Aceves, Claiborne, or pretty much anybody else he could throw out there.

And in fairness to Joe, it's not like he's totally operating from Torre's "2006 Scott Proctor Usage" handbook.  Both Warren and Betances got 4 days off earlier last week from Sunday the 11th to Thursday the 15th and Joe has yet to use either of them 3 days in a row.  He appears to be giving them as much rest as he can while still using them in as many key situations as possible.  Also, as converted former starting pitchers, Warren and Betances have plenty of experience pitching more innings.  Betances threw 84.0 total IP last season as a starter and reliever, and both guys have pitched 100+ innings in a season as recently as 2012.  Them making the transition down to multiple days a week for 1-2 innings at a time shouldn't be as dramatic as it would be for a reliever who's used to throwing 50-60 innings in a season getting bumped up to 80-90.  At least I don't think it should be.

Big deal or not, it would be nice to see Joe scale back a tiny bit to not risk overworking Warren and Betances.  If he can get Kelley back this weekend, that should make things very easy.  Kelley can reassume the 8th inning setup role and Warren and Betances can go back to sharing the 6th and 7th with Thornton.  Joe hasn't had the benefit of having D-Rob, Kelley, Warren, and Betances all healthy and available at the same time very much so far, and he's learned that Warren and Betances are reliable and capable of handling big situations.  As long as everybody can stay healthy, Joe should have no problem handling the late innings and dividing the workload up to keep his 4 best (and 2 youngest) relievers as fresh as possible.
Posted by Unknown at 11:00 AM