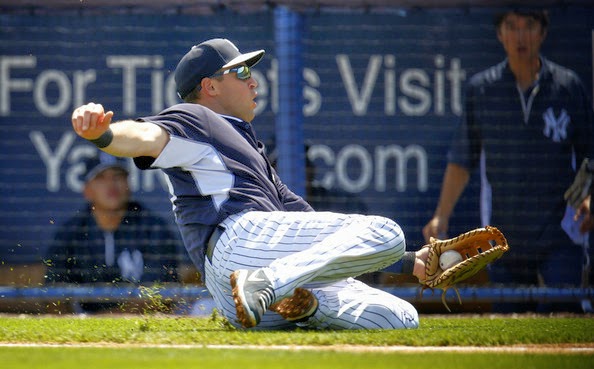 (Watch the wrist, guy.  Kinda got a lot riding on it this year.  Courtesy of Getty Images)

Early in Spring Training, we heard that Larry Rothschild was stressing the importance of pitching down in the strike zone to his pitching staff this year.  A few years ago that would have been an ideal strategy for the Yankees to maximize their defensive value.  They had a Gold Glove first baseman, a pretty good second baseman, a decent-to-slightly above average third baseman, and a shortstop who, for all his range limitations at a position most requiring good range, was good at making plays on the balls he could get to.

It's no longer that infield heyday, and the Yankees enter the 2014 season much less secure in their infield makeup than they were a few years ago.  Half of those former players will not be a part of this year's team.  The half that remains is not nearly what it was as recently as 2012.  For the first time in a long time, the Yanks enter a season not knowing what to expect from their starting infield defensively or offensively.  There are more questions than answers right now, and it could be a few months before the answers to those questions materialize.  To kick off the final week of the 2014 AB4AR Season Preview Series, let's look at the 2014 starting infield.


With so much uncertainty in play, it only makes sense to start off with the familiar faces.  In doing that, it only seems respectful to start with The Captain, Mr. Derek Sanderson Jeter, numbah 2.  This will be Jeter's 20th and final MLB season, a year-long event that will somewhat mirror what we saw with Mariano Rivera in 2013.  Jeter is a generational player, one of, if not THE, defining player of the last 20 years.  But seemingly for the first time in his career, he comes into a season with a lot of doubt attached to him.  There's doubt about his ability to stay healthy, doubt about how he'll hold up as a starting shortstop at age 40, and doubt about whether he can still put up the offensive numbers at that age to make up for the defensive warts.  His ST production is a bit alarming, but Joe has already said Jeter will start the season in his customary #2 position in the batting order.  How much he hits and how much time he spends at shortstop will determine how long he stays there.

Like Jeter, Mark Teixeira's expected level of offensive production (along with his spot in the batting order) is up for debate this year coming off a major injury.  Teix no longer looks like the ideal #3 hitter he used to be, at least not according to his ST results.  He is hitting a paltry .115/.324/.154 in 10 games with 1 lonely XBH, and although he's said continually that he isn't concerned about that, I doubt everybody else shares his sentiment.  Even bumped down to the 5th or 6th spot in the order, the Yankees need Teix to provide a consistent power and run-producing presence.  Taking walks and playing serviceable defense isn't going to cut it.  They can still count on Teix for the plus glove work, but what they need most is for him to be 75-80% of what he used to be at the plate and play 130ish games.  Without that, the defense won't be worth much.  Just look at what Overbay did last year.

Part of the reason Teix is still such a critical part of the lineup is the major offensive hit the Yankees are taking at second base this season.  Gone is perennial AL MVP candidate Robinson Cano and in his place is perennial walking DL stint Brian Roberts.  The Yanks must have seen enough in Roberts' 77 games in 2013 to convince them that he's got something left in the tank, and partially to their credit, he's looked OK thus far in camp.  Roberts is 9-34 at the dish with 4 BB and little power, about what he's been good for these past few seasons, and his defensive work at second base has been decent enough.  The biggest thing with him is going to be staying on the field.  It's something he hasn't been able to do since '09 and it's something the Yankees aren't well-equipped to address with backups.  Even if he only puts up his .627 ST OPS in the regular season, 100 games of that with average defense would be tolerable.

The hot corner is where the other new face and possible key to the entire infield resides.  Kelly Johnson was a shrewd signing as a super sub for the bench.  As the everyday replacement for Alex Rodriguez at third base, he's not as good, although he'll have a much easier time winning fans over than Roberts will at second simply by not being A-Rod.  Defensively, Johnson is better suited as a second baseman and he could very well end up spending a lot of time there if Roberts breaks down.  He's been "meh" at best at third so far despite working a lot with Mick Kelleher.  He's also the official backup to Teix at first, so who knows what Johnson's true role will end up being.  Whatever it is, he can make up for below-average defense with his production at the plate.  He's a professional hitter who knows how to draw a walk, and 20+ HR from the left side in Yankee Stadium is very do-able for him.

The phrase "do-able" might be the best way to approach gauging the overall performance of this group this season.  We know that Jeter, Teix, and Roberts aren't the players they used to be.  Now it's about figuring out what they still can be and what level of production from each of them is acceptable.  If .250/.310/.350 from Roberts and .270/.330/.370 from Jeter is what's do-able, will that be good enough?  If .250/.340/.450 with 20-25 HR from Teix is do-able, will you take that?  There are a lot of moving pieces to establishing that do-ability, many of which will depend on how Joe manages everyone's playing and rest time and how many DL stints are needed.  The Yanks definitely can't afford to lose Johnson to the DL for an extended period of time.  Because of their lack of impact depth behind each player, they can't really afford to lose any of them for too long no matter how much or how little they hit.

In fairness to these 4, there is reason to be hopeful about their potential offensive output.  Jeter has always excelled at the plate even as his defensive value began to dwindle.  Teix could be a wrist injury outlier and come back healthy and strong enough to be a 30-HR guy.  Roberts, if he truly is and will remain healthy, has always been an above-average hitter, and Johnson should see a spike in production thanks to the short right field porch.  On paper, each of these players is capable of being an above-average hitter.  They might not be a very good defensive group, but if they're on the field and finding a way to consistently contribute at the plate, that should be enough to keep them from being the obvious weak roster link and allow the Yankees to be serious postseason contenders.  If the recent injury trends prove to be a damning predictor for this year, however, all bets are off.