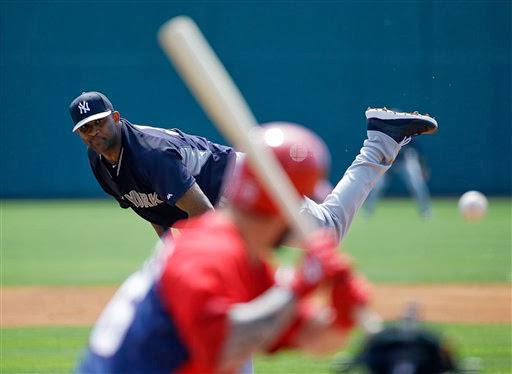 The final line on Tanaka's sim outing was impressive: 4 IP, 3 H, 1 ER (on a Jake Cave solo HR) and 9 K.  He threw 63 pitches, 49 for strikes (77.78 Str %), and according to reports threw 16 consecutive strikes at one point.  He looked good, he said he felt good, and he continued to stretch himself out towards a full workload with 3 weeks remaining until his regular season debut.  Most importantly, he showed again that the differences between pitching in the NPB and pitching in MLB are not causing him any problems.  He waited through his first rain delay last Thursday, he worked his first sim game yesterday, and he came through them without issue.

The final line on Sabathia's outing against the Washington Nationals wasn't especially good.  He made it through 3 innings, gave up 2 ER on 4 hits and 2 BB, and struck out 3.  He needed 61 pitches to get through those 3 innings and while I don't have a tally on the number of strikes, I'm sure it wasn't close to 80%.  Sabathia wasn't happy at all with his performance after the game, saying "I sucked" and describing multiple issues with his delivery to reporters:

“Just kind of erratic, like all over the place. I couldn't really get my delivery down and try to push off, get some leverage throwing down hill. It was hard for me. … I don’t know if I was just jumping off the mound or leaving too early. A couple times, Larry told me to just slow down and I threw a couple good pitches, but I only threw a couple good pitches out of 61.”

So while one pitcher is breezing through his first few weeks of MLB experience, the other is apparently struggling with his mechanics.  Keep in mind that these are the same mechanics that Sabathia went to Dr. Andrews to have examined this offseason and the results showed no major differences between the 2013 and 2003 versions.  It's not like he's changing anything up this year, but for whatever reason he just couldn't find it and settle in yesterday and he ended up struggling.

Now if you want to find some positives to take from Sabathia's outing yesterday, there are a few there.  As harsh as he was in his self-evaluation, CC did say that he's not worried at all and reassured reporters that he's "light years" ahead of where he was this time last year.  He also showed off his new cutter a few times and his velocity topped out at 89.  Yeah it sat 86-87 for most of the game, but that's still an uptick from his first start and that has to be taken as a good sign.  If you want to find a negative from Tanaka's outing, it was the second straight one in which he allowed a home run.

These 2 are scheduled to pitch again on Sunday, Tanaka in Tampa and CC in Panama as part of the weekend series with Mo.  This time they'll be on more equal footing as both will be pitching in a real game, but it's clear that they are nowhere near being on equal footing when it comes to where they're at with their games right now.  It's been smooth sailing for Tanaka as he adjusts to a completely new environment, and much rougher for CC as he tries to adjust his approach to the same environment.
Posted by Unknown at 10:30 AM