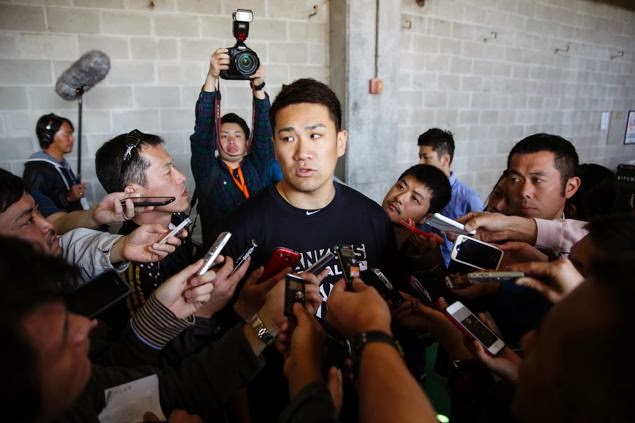 
Think back to the initial reaction when the deal was announced.  It was a barrage of tweets, blog posts, emails, texts, and phone calls celebrating the deal.  There hadn't been a reaction like that to a FA signing since the '08-'09 offseason, and even then I think the Tanaka reaction was bigger than the reactions to Sabathia, Burnett, and Teixeira combined.  This guy was a big deal before he became a Yankee and he became a bigger deal after he became a Yankee.  And that was just the beginning.

His introductory press conference was a media gathering unlike the Yankees have seen in over 10 years.  They issued over 200 press credentials, the most since they introduced Hideki Matsui.  Tanaka made front and back page news by renting out his own private jet to fly himself, his wife, a few buddies, and his dog to New York in style, almost as if he was baiting the NY media into blowing up over him more than they already had.  When he showed up to Spring Training he was followed by a ton of reporters and cameras and the fury has hardly died down as he's gotten settled in his spring routine.  The guy has to pitch around a rain delay and it's a big deal.  He throws his first sim game of his pro career yesterday and it's a big deal.  And his splitter?  It's basically taken on a life of its own as players and coaches comment on how good it is.  It hasn't been confirmed yet, but I think the rotation of his splitter actually has the power to slow down the aging process.

Rest assured, this is how the Tanaka coverage is going to continue to go for the remainder of this year.  It'll only intensify once the regular season starts and the results of his outings matter, and good, bad, or otherwise, every start is going to garner a big reaction.  If he pitches well, fans are going to cheer and writers are going to praise him.  If he pitches really well, they're going to praise Cash and the front office for being so aggressive in going after him.  If he has one bad start, fans are going to worry and all the questions about the differences between the NPB and MLB games are going to resurface.  If he has 2 bad starts in a row, there might be panic in the streets.  If he completely bombs, fans are going to boo (louder than they would have cheered) and everybody will curse Cash and the FO for being so aggressive in going after Tanaka.  There will be no middle ground, no gray areas.  Only good and bad, black and white, the hero or the goat.

And underneath all of that is going to be a 25-year-old man with a lot of pressure on him to perform.  The early signs from Tanaka's bullpen sessions and ST games is that he's the real deal as a pitcher, and the more he pitches the more comfortable I think he's going to become and the better I think he's going to pitch.  Tanaka isn't some run-of-the-mill scrub like Igawa.  He's got legitimately great stuff and a long track record of dominance in Japan.  Based on that alone, he should project to be more Darvish and Kuroda than Igawa but as the old saying goes, that's why they play the game.

Play the game he will this season, and the spotlight is going to be shining brightly on him at all times.  Masahiro Tanaka has been built up to be the next big thing and he's pitching in the biggest American sports market.  How he handles this first season could lay the groundwork for the remainder of his Yankee career and hopefully the next generation of Yankee success.
Posted by Unknown at 1:30 PM