2014 Storylines: A Rotation In Transition 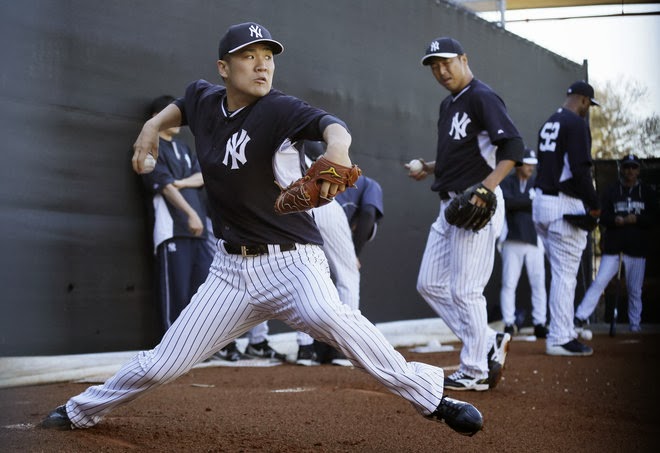 There's nothing more important than starting pitching in today's MLB landscape.  It doesn't matter how many runs your lineup scores if your starter can't make those runs stand up, and if your lineup doesn't produce that many runs, you can still win games on the back of great starting pitching.  It's with that in mind that I kick off the 2014 "Season Storylines" series with a discussion of where the Yankee rotation finds itself heading into the 2014 season and where it might be heading in the near future.  There's a transition happening, one that could propel the Yankees back towards the top of the championship contender heap if things go right or one that could lead to their further decline down the contender ladder if they don't.


The backbone of the Yankee rotation for the last 5 years has been their veterans.  CC Sabathia has been the unquestioned ace since signing, Andy Pettitte has been the reliable, stabilizing force in the middle to make up for the inconsistencies of guys like Phil Hughes and He Who Shall Not be Named, and recently Hiroki Kuroda has settled in behind CC as the consistent #2 starter that nobody else has been able to be.

But that backbone is starting to fracture.  Pettitte has retired again, for good this time.  CC started to show major cracks in his ace armor last year, cracks that may be irreparable and could already be showing signs of widening if you're an early spring "velo" worrywart.  And Hirok, whether he holds up for another full season or 200+ innings or fades down the stretch again, is likely on his last 1-year deal with the Yankees.  The sources of stability in recent Yankee rotations could be completely gone by the end of this season.

Behind them is the next potential wave of starters who could step in to assume those roles passed on by CC, Hirok, and Andy.  Cash can try to downplay the importance of Masahiro Tanaka's role all he wants, the bottom line is the team didn't offer him over $22 mil per year to be a mid-rotation guy.  His makeup, his age, his contract, and his results in the NPB all point to a guy with top-of-the-rotation potential and possible future ace status.  Ivan Nova has been one of the inconsistent mid-rotation arms since breaking into the show, and he's already pitching and talking like a player who's ready to take the next step towards a more important role.  And let's not forget about Michael Pineda.  While he's been a bust so far, he's still only 25 years old, he still comes with multiple years of cost-friendly team control, and he looked pretty damn good in his first ST start last week.

At face value, the Yanks appear to be set up perfectly to make the transition from the old guard to the new guard.  Baseball isn't played in a vacuum though, and the uncertainties surrounding that cache of younger pitchers is what makes this a season-long storyline worth following.  Can  Tanaka make the adjustments to the MLB style of play, including changes to his workload and regular pitching schedules?  Will his stuff be as effective against MLB hitters as it was in the NPB?  If it's not, can he adapt his game to what will make him more effective?  Is Nova really capable of being more consistent and taking that next step or is what we've already seen what we're going to get moving forward?  And is Michael Pineda's shoulder fully recovered?  Will it hold up over a full season's worth of work?  Can he get back to being the pitcher he was in his rookie year or is he damaged goods destined to a career of "what ifs"?

There's also the uncertainties with CC and Hirok to consider.  In order for the young pitching to cross the transitional bridge and take over the top of the rotation in 2015, Sabathia and Kuroda have to help build that bridge by remaining competitive this year.  The Yankees can't afford a full-season repeat of CC's 2013 2nd half and they can't afford to have Kuroda either break down physically or regress too severely if he does stay healthy.  The injury concern is always present in any starting rotation, and at least 60% of this year's falls under the category of "legitimate injury concern", 80% if you're worried about Kuroda's age.  In order for this transition to happen smoothly, the Yankees need these 5 guys (and David Phelps if he ends up being the 5th starter) to be both healthy and effective.

There are plenty of reasons to be optimistic and excited about the starting rotation in 2014.  A bounce back from CC, a confirmation by Tanaka that he's the real deal, a healthy year from Pineda, and 2013 repeats by Kuroda and Nova would make the Yankee rotation one of the best in baseball.  There's a lot that could happen to derail that possibility though, and the underlying theme for whatever happens is going to be this transition from the Sabathia-Kuroda-Pettitte years to the next generation of top Yankee starters.  That transition may prove to be a smooth one and it may end up being rockier than any of us envisioned, but it's definitely going to happen this season one way or another.
Posted by Unknown at 1:30 PM