What Is Preston Claiborne's Ceiling? 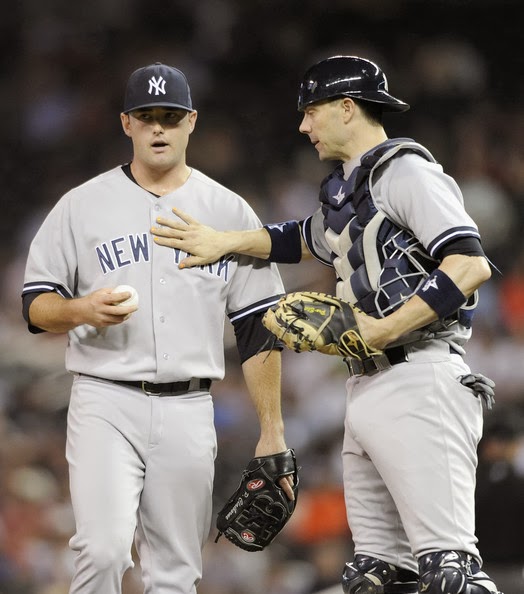 On Monday, I took a quick peek back at Preston Claiborne's 2013 season.  He became the latest homegrown reliever to graduate to the show last year and as we all know now that graduation resulted in some very mixed results.  Long story short, Claiborne started off like a house on fire in May and June, pitched pretty well in July, then fell apart in August and September.  All together it added up to a 4.11/4.14/3.88 slash line, 19.6% K rate, 6.5% BB rate, and 0.2 fWAR in 50.1 IP.

Despite my multiple suggestions that the Yankees need to go out and acquire another relief pitcher, including the latest one from a few days ago, they seem prepared to head to camp with what they've got and sort out the back end of their relief corp in Spring Training.  That leaves Claiborne as the unofficial "7th Inning Guy" right now, at least I'm assuming it does since he was the 4th of the 4 guys Joe mentioned by name when asked about the bullpen last month.  That's not a bad spot to be for a player who never popped up on any top prospect lists while he worked his way through the system and never had his stuff talked about by scouts anywhere near as much as a Dellin Betances or a Jose Ramirez or even a Mark Montgomery.  The question now becomes can Claiborne hold onto that spot this year?  And looking further down the road, can he develop into anything more than a middle reliever?

The jury is still out as far as the projection systems are concerned.  Oliver has Claiborne pegged for a 3.96/4.39 ERA/FIP split with fewer strikeouts and more walks than he had last year, Steamer projects the same K and BB trends with similar ERA/FIP numbers, and ZiPS has him at a 4.29 ERA in 63.0 IP.  All of those would be perfectly fine numbers for a reliever who filled a mostly low-leverage middle relief role like Claiborne did last year.  But if the Yankees are counting on him to be more than that in 2014, I think they'd like to see his actual numbers come out better.

If he has it in him to do that, the first thing Claiborne will have to do is repeat his success in throwing strikes and limiting his free passes.  Command was never a major strength of Claiborne's game when he was in the Minors.  He only posted a BB rate below 8.4% once and that was in the 10.1 innings he pitched in Triple-A last year.  To finally harness better command of his stuff at the highest level of competition is a great sign, but a 1-year sample isn't enough to definitively say he's figured it out.  It also wouldn't hurt to cut down on that 12.5% HR rate, although in fairness to Claiborne, 4 of the 7 HR he gave up last season came in September.

As far as the rest of his tools go, there's plenty to work with even if nothing pops out.  His fastballs, both 4-seamer and 2-seamer, averaged mid-to-uppers 92s velocity last season and he threw them almost 60% of the time.  The other 40% was a combination of slider and changeup, with the changeup actually rating as his most effective pitching according to PITCHf/x.  Claiborne had a pretty good GB rate (44.8%) and a pretty good SwStr rate (10.6%), so if we're putting those pieces together it certainly appears as though he's got a good foundation to build on.  At age 26, there probably isn't much more velocity to be added to his heaters, but if he continues to develop his changeup into a primary out pitch and he can at least maintain and hopefully improve his overall command, it's more than reasonable to expect Claiborne's performance to get better.

How will that improvement reflect in his stats?  And how much room is there to improve?  That's the real answer the Yankees are looking for if they see Claiborne as a key part of the bullpen going forward and it's impossible to answer after just 1 year.  The lack of true "power" stuff and deception in his delivery might make him easier for hitters to figure out as they face him more and more.  The early success we saw in 2013 and the crash-and-burn September could be a sign that Claiborne got by initially because teams had no book on him and then started to figure him out later in the season.

Personally I don't see Claiborne ever reaching D-Rob levels of dominance.  Neither his changeup nor his slider are as good as Robertson's curveball.  But I think he's got enough to work with to become a reliable late-game reliever, someone in the low-to-mid 3.00s in ERA and FIP who strikes out a batter per inning and keeps his BB rate in the 5-7% range.  With all the uncertainty surrounding their bullpen this season and beyond, I think the Yanks would sign up for that.
Posted by Unknown at 10:30 AM