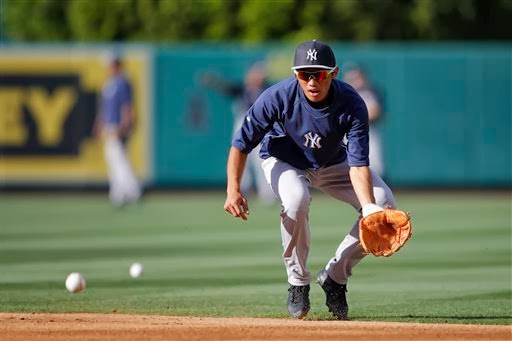 Just when you thought Prospect Week was over, it reaches up out of the water like Jason at the end of the original "Friday The 13th" and pulls you back under one more time.

I mentioned last week that I didn't get to touch on as many of the tool rankings as I wanted to, so I figured a slow news day was a good time to circle back and hit the one I most wanted to cover.  Like I did with the pitching stuff rankings last week, I'm going to make things easy here and lump all the various defensive skills into one category for this list.  Speed, range, hands, footwork, timing, arm strength, instincts, it's all being balled up into the "defense" category, otherwise I don't think I could ever settle on a top 5 for each individual skill.  After the jump, my top 5 defensive prospects.

Mr. Williams makes his second appearance atop an AB4AR top 5 tools ranking and this appearance is directly related to the #1 spot he landed on the "speed" rankings.  Williams' natural speed and athleticism made him a highly-touted defensive prospect the minute he was drafted, and what he's shown on the field over the last few years backed that up.  The strong instincts, reads, and routes he takes to balls in center only serve to make his speed more of a defensive weapon, and paired with a pretty good outfield arm that could get better he's got future Gold Glover written all over him.

For everything he's not, or at least hasn't been, at the dish so far in his pro career, Culver is all that and then some in the field.  He's been the top defensive shortstop in the Yankee system, Minor or Major Leagues, since his first GCL season and his defensive makeup is what's going to carry him to the show and possibly keep him there for a long time.  He's got great range, soft hands, and a plus-plus arm that can make throws from anywhere he can get to on the infield.  Pair him with Brendan Ryan right now and you might have the best defensive shortstop tandem in baseball.

He's admittedly a little young to be ranked this high, but legitimate second base prospects are difficult to come by these days.  They usually end up being guys who couldn't hack it at short or third, and that isn't the case with Katoh.  He was rated as an excellent defensive second baseman right when he was drafted and he put his full skill set on display this past season.  His mechanics around the bag and footwork are already excellent for a player his age, and the only thing holding him back from being on Culver's level is a weak arm.

Murphy doesn't have any standout catching tools like Gary Sanchez does, and that may make it seem like a stretch to put him on this list.  But when you were possibly being moved to third base 2 years ago and now you're on the cusp of breaking into the Majors as a catcher with positive marks across the board on your defensive game, that says something.  Murphy was no slouch throwing out runners last season either, and he gets a boost from me for being good at calling and thinking a game and working with his pitchers.  That's something that only a catcher can do to impact a game defensively and something that only the best catchers are truly good at.

2 toolsy guys, both with limited experience and a ton of natural skill.  I couldn't decide which one I liked better so I chose both of them.  Avelino is pretty polished defensively already according to the scouting reports I've read, and while his arm isn't Culver's it sounds like it's good enough to stay at shortstop long-term.  Judge is ticketed for an outfield corner as a pro, but he was fast and athletic enough to play center in college and he's got a plus arm.  Once he gets a hang of playing the corners he could blossom into a very good outfielder.
Posted by Unknown at 1:30 PM