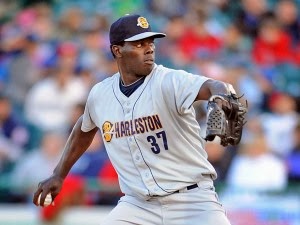 There's a reason the Yanks gave him a 6-figure signing bonus and waited patiently while he worked through his visa/identity issues and that reason is his stuff.  DePaula works with a mid-90s fastball that has touched 98-99 in the past, a low-80s slider/curveball hybrid that's tight and has good late movement when he's commanding it, and a work-in-progress changeup.  The fastball and slurve are both plus pitches already, the type that would play as a starter or a reliever and completely handcuff any lineup.

Another 3-pitch pitcher who works off his plus fastball, Ramirez features one that lives 92-94 and can be juiced up to the upper 90s on occasion.  He pair that with a mid-80s changeup that he's developed since turning pro, a pitch that has fading movement away from lefties and down and in on righties.  His top secondary pitch use to be a mid-80s slider, but that pitch has been relegated to 3rd pitch duty with the improvement of the changeup.

Severino is practically a Ramirez clone with his 3-pitch mix.  His fastball is low-to-mid 90s, his top offspeed offering is a fading changeup, and his third pitch is a mid-80s slider.  What gets him the third spot on my list  is the fact that he boasts 2 plus pitches and uses all 3 of them well at such a young age.  He was blowing guys away as a 19-year-old in 2013 and he'll be looking to do it again at age 20 this year.  There's still room for his stuff to improve, whereas Ramirez and DePaula are probably set with what they've got.

If he can ever harness his command of his pitches, Mitchell could be really special.  He throws a mid-90s 4-seamer, a low-90s 2-seamer, a 12-to-6 curveball in the low 80s, and a mid-80s changeup that's gotten better over time.  His velocity has increased since he was drafted and put on weight, it's the inconsistency in all these pitches that keeps them from being truly plus-plus stuff.

18-year-old HS pitchers with 3 pitches are a rare breed, and that's just what Clarkin is.  His fastball is low-90s now but has room to increase velocity as he puts on some weight, his power curveball is mid-to-high 70s now with the chance to do the same as his heater, and his changeup is more advanced than that of most pitchers his age.  Clarkin is working with a great set of tools, better stuff than ManBan had when he first broke into the system.
Posted by Unknown at 9:32 AM