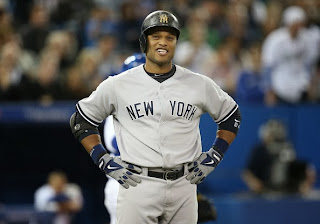 It still doesn't feel completely real to me.  After 9 years, over 1,300 regular season games, 1,649 hits, 204 home runs, 5 All Star Game selections, 5 Silver Slugger Awards, 4 straight top 6 MVP finishes, 2 Gold Gloves, and 1 World Series ring, Robinson Cano's Yankee career is over.  The last great homegrown prospect, and the first Yankee since Andy Pettitte to come up through the organization and leave for another team via free agency, Cano agreed to a 10-year/$240 million deal with the Seattle Mariners yesterday.  His physical, which he will undoubtedly pass, is scheduled for some time this weekend and the Mariners are set to introduce him at a press conference on Monday.

The one player I thought the Yankees absolutely had to sign, regardless of what else they did this offseason, and the one player I thought they absolutely would sign is gone.  The Yankees have lost their best player and they now have a helluva lot more work to do this offseason to replace him.  My thoughts on the deal, Cano's decision, the Yankees' strategy, and where they go from here after the jump.


- First and foremost, the contract.  10 years is a ridiculous number of years to give to any baseball player in his 30s.  We've seen it play out negatively with A-Rod and it's already starting to go south in a hurry for the Angels with Albert Pujols.  Cano is older than Brian McCann and just signed a deal for twice as long as McCann's.  It's hard to imagine him staying productive for the full 10 years, and those last few could be brutal for the Mariners.

- In terms of value, however, I thought the deal was more than fair.  Cano was never going to get the $30 mil a year he was reportedly seeking.  But he's very worthy of $25 per and that was what I thought the Yankees would go to to get him.  No one needs to be reminded of all his stats.  Cano is easily one of the best 5-10 players in baseball right now on his worst day and that type of talent commands the type of money he got.  The problem with this contract is entirely the length, not the dollar amount.

- On that note, you have to give some kudos to the Yankees for sticking with their plan of not going more than 7 years.  I read yesterday that they offered 7/$175 mil as their final offer to Cano on Thursday night before he headed to Seattle.  In terms of AAV, they offered Cano more money.  They just weren't willing to budge on the number of years and it's not hard to understand why when you see how the A-Rod deal played out.

- On the other hand, it was a bit strange to see the team take such a hard line with Cano, their best player and a homegrown player to boot, and then hand out such a big contract to Jacoby Ellsbury.  I'm sure that deal didn't make Cano or his people happy, and it's understandable that he took that as a sign to look elsewhere for the type of deal he wanted.

- Basically this came down to a business decision for both sides.  The Yankees didn't want to give out more years to a player in his 30s even though they were willing to match dollars with anybody.  Cano didn't want to take less than a 10-year deal if he could get one somewhere, and he and his agents found a team willing to go there.  It's not a matter of the Yankees being cheap or Cano being greedy.  It was simply MLB free agency playing out the way it's supposed to.  Cano wanted the biggest deal he could get and he got it.  Nothing wrong with that.

- How will Cano do out in Seattle?  It's hard to say.  I took a quick look at it yesterday with the comparison of his slash lines between Safeco and YS3 but still haven't had a chance to fully look into it.  I think it's safe to assume that some of Cano's power will be hurt by the larger dimensions of Seattle's park and the elimination of the short porch in right at Yankee Stadium.  He's also going to be hurt by a lack of support around him in the lineup, unless Seattle really is planning on making some more big moves to support him.  In terms of maintaining a high(er) level of production through the remainder of his career, staying with the Yankees was obviously a better choice.  But again, this was strictly a business decision for him and that's what influenced the deal.

- As for the Yankees, we've heard all along that they had a backup plan in the event they didn't retain Cano.  Now it's time to see what that plan is and how quickly they can execute it.  It got started last night with the signing of Carlos Beltran, a deal that I hate much more for 3 years than I would have for 2, but there's still a lot that needs to be done.  The McCann/Ellsbury signings are basically cancelled out by Cano leaving in terms of offensive production, so it's almost as if Beltran is the first significant addition to next year's lineup.  The team still needs a starting second baseman to replace Robbie (no, I don't think Kelly Johnson is the answer there), a starting third baseman (ditto here for Johnson), and multiple pitchers.

- Based on the precedent they've already set, the Yankees have to continue to be aggressive and spend on the FA market to make these things happen.  They can't take their foot off the gas just because they didn't get Cano and I don't expect them to.  A lot of fans out there don't like it, but honestly, what other option is there?  They can't replace from within because they don't have the high-level MiL talent, and they can't get super aggressive on the trade market because it would take that same high-level prospect talent to bring back the kind of players they need.

- Having said that, it might be worth putting a call into teams to see if they have any interest in Brett Gardner.  I know the team said they weren't trading him after the Ellsbury signing, but he's arguably their best trade piece right now and could be used as the starting point of a trade package for a starting pitcher.

- Speaking of starting pitchers, if his NPB team does post him, I think losing Cano has to make the Yankees much more aggressive in going after Masahiro Tanaka.  It's going to cost them more in terms of salary, but so be it.  He's the best available starting pitcher now that they've brought back Hirok and they desperately need some youth in that rotation.  Screw the screwjob on the new posting rules.  Submit the highest bid, make Tanaka a big offer, and beef up the rotation for next year and beyond.

- What else would I do if I were the Yankees?  I'd add Omar Infante and Mark Reynolds at second and third.  Infante is nothing special with the bat, but he can be at least average at the bottom of the lineup and there's something to be said for that.  He can also play an above-average second base.  Reynolds will come cheap and bring some more pop to a lineup that still needs some, and Johnson can spell them both when the time and the matchups are right.

- If he's posted, I would go after Tanaka to fortify the rotation and I'd look to add Jesse Crain and maybe a Rule 5 Draft arm to the bullpen.  If everybody stays healthy, and they keep Gardner for added speed/outfield defense, I think that's a team that contends for the playoffs next year.  I really do.

- I'm trying to keep this as baseball and business-focused as possible, but on a personal note I'm really going to miss Robbie.  He had grown to become my favorite current player on the team over the last few seasons.  Where many other saw laziness and apathy, I saw an athlete so smooth and cool and confident in his own abilities that he didn't need to get caught up in the "rah-rah" emotional side of sports.  Cano never looks any different in the top of the 1st than he does with the bases loaded in the bottom of the 9th.  He has a beautiful swing, one that always lets you know when he had hit a ball just right, and he's slick and effortless in the field.

- Cano made baseball, a sport I sucked so bad at that I quit it to play lacrosse, look incredibly easy and incredibly fun to watch and I'm going to miss being able to watch that every game of every year.  I'm not mad that he left, I don't think he owed anything to the Yankees.  If I had an extra $65 million thrown in my face, I guarantee you I'd take it too.  When he returns to The Stadium next year, I hope the game is televised nationally so I can watch.  And if he's ever back there as a visitor when I'm in attendance, I'm going to stand and cheer him as loud as I did when he was in pinstripes.

- Robinson Cano was a great Yankee.  It sucks losing him and I'm going to miss him.  It would have been awesome if the Yankees found a way to bring him back, but there was too much damage done by the now infamous A-Rod deal to allow that to happen.  Best of luck out in Seattle, Robbie.  Hope they give you a few other bats to support you in that lineup.
Posted by Unknown at 12:00 PM