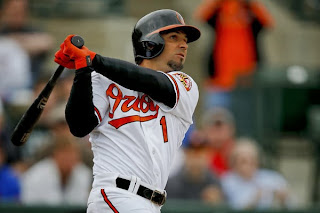 Roberts, once considered among the best all-around second basemen in the game, has faded into near obscurity over the past 4 years due to injuries.  It all started with a herniated disc in his back in Spring Training 2010 and it hasn't let up since then.  Since that injury, Roberts has missed over 70% of the 648 total regular season games played thanks to an abdominal tear, a groin strain, hip surgery, a ruptured right knee tendon, and a frightening bout with post-concussion syndrome that came after he hit his head sliding in early 2011.

A combination of the injuries, the resulting lost time on the field, and natural age-related regression have sapped Roberts of almost all his strengths as a baseball player.  He's registered as a below-average hitter over the last 3 seasons, he hasn't posted a BB rate above 10.0% since 2010, he's stolen just 10 bases since 2011, and he's been worth -14 defensive runs saved since the start of 2009.  While none of that should come as a big surprise given his age and length injury history, it does make it pretty surprising for the Yankees to be interested in him.  They just got done watching injury-plagued 30-somethings like Travis Hafner and Kevin Youkilis fail in their bids to prove themselves on 1-year deals, and guys like Jeter, A-Rod, and CC are no sure bets to stay on the field themselves these days.

Even more confusing is the part in Rosenthal's reports where he mentions the team still being in the market for more upgrades at second and "not necessarily being comfortable" with a Roberts/Johnson platoon at second next season.  If that's the case, and the Yankees are basically admitting that they don't think Roberts is the best option out there, then why bother signing him at all?  Why not go after whatever other players left you deem better than him first?  Why promote Roberts to de facto Plan D if in reality you view him more as a Plan G or Plan H?

I get that this is going to come as a very low-risk signing, and yes, there does exist the possibility that Roberts can stay healthy enough to provide some meaningful reward for a team that needs a lot of help at second base.  There's been very little to indicate that's what will happen, however, and there's no reason to expect that based on Roberts' last 4 seasons.  Pursuing a player of his caliber to replace your former best player and openly admitting that you don't view him as the full-time replacement doesn't make a lot of sense given the other moves that have been made this offseason.  It reeks of desperation and comes off to me as an admission on the Yankees' part that maybe they didn't have their backup plan for Robbie leaving put together as well as they thought.

If you want to look at this situation in a more positive light, you can point to Roberts' numbers in 2013 as a sign that he still has something to offer.  His 77 games played were the most he's had since the injury problems started in 2010, he was rated as an above-average defender at second, and he showed a little pop in his bat (.143 ISO, 8 HR in 296 PA).  The Yankees will surely do a thorough evaluation of his medical records and a thorough physical to make sure he doesn't have a lingering injury time bomb ticking anywhere before signing him to any deal.  I still can't help but think this is a bit of a panic move by the Yankees though, a move to ensure they at least have "somebody" at the position.  When that somebody is another banged up player on the wrong side of 30 whose best days are well behind him, I have flashbacks to this past season and they aren't pretty.  If the Yankees have more players in mind to help the depth at second base, I sure hope they go after them and manage to get another one.  Because I'm no more comfortable with the idea of Roberts being a part of a starting platoon than they are.
Posted by Unknown at 4:00 PM