Why Not ManBan For Next Year's Rotation? 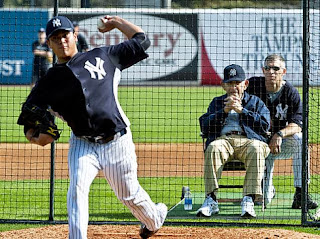 Here's a whacky idea to fill a spot in next year's rotation.  Give a spot to Manny Banuelos.  You remember Manny Banuelos, right?  Former top prospect, lefty pitcher, was striking out Double-A hitters on the reg at age 19 a few years back.  He's been out of action since early 2012 and rehabbing Tommy John Surgery since last October.  He's also been throwing for months and is expected to be 100% healthy for the start of next year.  The Yankees took a very cautious approach with ManBan's rehab, waiting almost a year before letting him pitch in simulated games late this season and shutting him down completely for the winter to let him rest.  Given the uncertainty in the back end of their 2014 rotation and the unlikeliness of the front office to spend much to fill it, they might want to consider taking the kid gloves off their former organizational crown jewel and taking a chance with him.

The idea sounds reckless and unnecessarily risky, but is it really?  Banuelos was on the fast track to the show before the elbow problems stopped him in 2012.  Had he not missed almost all of the last 2 years because of the injury and subsequent surgery, it's highly likely he would have been pitching in the Yankee rotation this season.  He's only 2 years removed from cracking the MLB.com Top 50 Prospects list and had drawn positive reviews in the past on all 4 of his pitches, including the cutter he was reportedly working on with Mariano Rivera in 2011 spring camp.

Lefty prospects with a ceiling like Manny's don't come around all the time.  Even with the lost development time and lack of innings on his arm, ManBan is probably still a better option as a 5th starter than David Phelps or Adam Warren.  Hell, he might even be a better option than Michael Pineda at this point.  And if it's the innings workload you're concerned about, consider Buster Olney's article from August on the wild inconsistencies in organizational approaches when it comes to being cautious with the development and injury management of young pitchers and the drastic differences in results.  For every Stephen Strasburg or Dylan Bundy who gets handled carefully and still gets hurt, there's a Tim Lincecum or Felix Hernandez who doesn't.

Not saying that ManBan is or ever will be as good as those pitchers.  The point is that it's basically a crap shoot when trying to protect young pitchers and the best laid plans can still go awry.  The Yankees were relatively cautious with their handling of Banuelos before he got hurt and they've been even more cautious bringing him back from TJS.  He's been in the organization since 2008 and eventually their control over him will expire, just like it is with Dellin Betances next year.  Now that he's healthy again, the smartest approach might be to get aggressive with him and get what you can out of him while he's still under your control.  That's the approach San Fran took with Lincecum and those years worked out pretty well for them.

When the season does start I fully expect the Yankees to continue their "handle with care" management of Banuelos, for the sake of consistency if nothing else.  He'll almost certainly start the season in Triple-A with an innings limit in place.  Hopefully that innings limit isn't too short - Banuelos did pitch 129.2 innings in 2011 - because the Yankees are going to need rotation help at some point and Banuelos would be the perfect option to fill a spot.  You can argue that it's better to keep playing it safe with him and think of the big picture, but why can't that big picture start now?  The Yankees have squandered too many recent prospect opportunities because of injury problems and poor development paths.  ManBan was and could still be the best of those prospects, if the Yankees are open to changing their style and being more aggressive with him.  At this point, what do they really have to lose?
Posted by Unknown at 11:00 AM