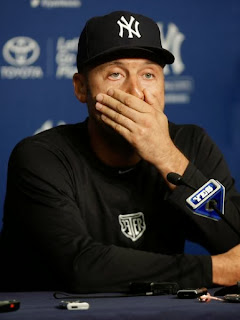 
Things have been somewhat surprisingly quiet on the Jeter front since the end of the regular season.  He made a quick statement to The Post right after the season ended saying he hadn't made a decision on his 2014 option and it's been total media blackout since then.  Everybody assumes that Jeter will exercise the option and come back.  Knowing the type of player he is, there's no way he would want to go out on those poor 2013 terms.  He just saw Mo come back from a serious injury and go out on better terms, his own terms, this season, and it would make sense for him to want to do the same.  It would also be smart business sense.  What player would willingly leave money on the table when he had the final say over whether or not he was getting said money paid to him?

Then again, maybe Jeter doesn't want to go through the grind again.  Maybe this season was a wake up call to him that he's not the player, athlete, or person he used to be in his prime and he doesn't want to play his final year out as a shell of himself.  I know I, for one, don't want to see my favorite player go out that way, so maybe Jeter surprises us all, turns down the option, and retires.  That would give the Yankees a little more salary relief and give them a clean slate to work from to find their next shortstop.

I think the chances are very slim of that scenario actually happening, but it's fair to say the chance is greater than zero right now given how little we've heard from Jeter over the last month.  Either way, we'll know The Captain's decision in a few days.
Posted by Unknown at 1:36 PM