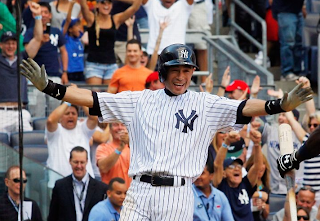 
- First, expensive or not, the new Yankee Stadium is an absolutely beautiful ballpark.  Walking in from the train station on Friday night, I had to stop and take a long look at it as we headed in, just to admire what an impressive and brilliant structure it is.  I took a few more of those looks once we got inside, and from strictly an aesthetic standpoint the new park is an outstanding tribute to the team's long and storied history and a wonderful place to watch a ballgame.

- On the matter of price, getting to see firsthand how much everything is once you're inside and how much the amenities and features cater to the deep-pocketed fans, I now understand why the crowds at the new Stadium are much more subdued than they was at the old one.  These Yankee Stadium crowds aren't the diehard fans, the lifers who bleed white and navy blue.  It's the business men and women entertaining their kids or clients, or people with money to burn in the city who want to go to the park for the experience, not the team.  From that standpoint, it was a bit disappointing to not get the same feelings and fan experience I had as a kid in the old Stadium atmosphere, but my friends and I still did our damndest to bring a little energy and real Yankee fan spirit to our sections.

- Friday night we sat upper deck down the third baseline, somewhere just off the middle between the third base bag and the left field wall.  It gave us a decent perspective of Andy's stuff and I thought he looked pretty good.  His velocity on his fastballs was good and he threw a lot of crisp offspeed pitches.  The Red Sox hitters are just a step up from the teams he's beaten recently and they got enough off him to keep themselves close enough to strike late.

- Not to jump too far ahead, but it was the same situation yesterday with Kuroda.  He was better than he has been, but had to work hard almost every inning and he still gave up his share of hits and walks to a tough lineup.  This year's Red Sox team is a lot like the Yankees of the late 90s, moreso than the Yankees of the 2000s were.  They foul off a ton of pitches, they very rarely swing at bad ones out of the strike zone, and they make pitchers earn damn near every out they get.  They've all got pop and they've all got patience.

- Back to Friday now.  It was clear Felix Doubront didn't have it from the jump.  He gave up a lot of walks and a lot of hard hit balls.  The way the Yankees were tagging him, it felt like that game was going to be in the bag in the late innings.

- Unfortunately Joe had to go to Phil Hughes with D-Rob out and Hughes was far from impressive in his first relief appearance of the season.  He was too fastball heavy again, couldn't locate it worth a damn, and in fairness had a little bad luck on the Pedroia infield hit.  Still not a good outing and it's hard to see him getting any kind of serious offer from a team with the way his 2013 has gone.

- Mike Napoli's at-bat against Logan was high drama.  Logan was in control 1-2 and then Napoli laid off 2 pitches to get himself back in a position where he was going to see fastballs.  He fouled off 2 good ones, got Logan's timing down, and then hit one just fair enough into right to tie the game.  Hats off to him for a job well done, although at the time I could have killed somebody watching that inning play out.

- Really tough sledding for Preston Claiborne right now.  He looked completely overmatched by the moments and the Boston hitters this weekend.  Kid still has a little growing up to do to become a truly reliable member of this bullpen next season.

- The less said about Saturday's game the better.  Huff looked spectacular in the top of the 1st and there was a vibe in the Stadium like people were relieved they finally didn't have to deal with Hughes' shit in the rotation anymore.  Then he gave up the double to Ortiz and the homer to Napoli and that vibe went away.  I still think it was the right move going to Huff for Hughes, but truthfully Huff had no business starting that game against a lineup like Boston's.

- We couldn't see Ichiro make that catch against the wall on Ortiz from our seats in the right field bleachers, but it looked incredible on replay.  I've never been an Ichiro fan and I still don't want him on next year's team, but it was fun watching him play the outfield in person.  Dude is cool as a cucumber and never rushes or wastes any motion out there.  Just a professional doing what he does and making everything look easy.

- Best thing I could say about Saturday was at least it was good to see Brett Marshall pitch well.  He didn't impress at any level this season and really hurt his prospect stock heading into next year's rotation competition.  His performance, even in garbage time, gives him something positive to build on.

- You never appreciate how much the game really slows down with Kuroda when he puts men on base until you watch live.  The top of the 2nd yesterday moved slower than a snail's pace and it was almost boring to watch despite what was hanging in the balance.

- Hirok didn't have much early on, but somewhere around the 3rd or 4th he seemed to find his slider and splitter command.  Early on he was leaving a lot of them and the Boston hitters were fouling a lot of them straight back.  In the later innings he started getting the ball down and getting some swings and misses.  That's what he needed and that may have been a sign that he's starting to find his command again.

- Kudos to Mark Reynolds for not trying to bunt in his 2nd AB.  I don't know if Joe called that or he did it on his own, but there's no reason for him, or Curtis Granderson for that matter, to be bunting that early in games.  Swing the fucking bat.

- The rally in the bottom of the 5th was one of the stranger things I've seen.  3 measly bloop hits that somehow found holes off Lester and then Robinson Cano showed everybody how it's done with the line drive 2-run double.  The Yankees had 11 hits yesterday, and maybe 3 or 4 them were well struck.

- Nice little weekend for Cano.  7 hits, 6 RBI, more smooth, solid defense at second base.  While the rest of the cast around him has changed for better and worse this season, he's stayed steady in the middle of that lineup.

- It didn't sound like there were many people in the Yankee clubhouse who thought Middlebrooks' hit off Mo in the 9th was going to get out, and I certainly didn't think it was going to either from my seat down the right field line.  It looked like a routine pop-up and it got just high enough to catch that wind and get pushed out.  Tough luck in an otherwise solid performance by Mo.  The strikeout of Ortiz was especially gratifying to watch.

- As much bad Yankee baserunning as there was this weekend, Ichiro's steal in the bottom of the 9th was stellar.  My friends and I were saying he couldn't wait, he absolutely had to get to second base.  The Yankees couldn't afford to go to extras with that bullpen.  They had to win the game right there and Ichiro made it happen with that steal.

- On A-Rod, he looks worse running the bases live than he does on TV, and that's saying something.  He still looked OK to me at the plate though, and I was happy to stand and applaud him every time he came up to bat.  Generally there were slightly more boos than cheers from what I heard.  Doesn't change the fact that people still come to see him.

- Even though they're only 2.5 games out, it's hard to see the Yankees pulling another big run out of their bag after this weekend.  They're old, they're tired, they're beat up, and they just don't have the depth of talent to compete with the big boys in the AL East on a consistent basis.  That's what the team was like on Opening Day and it's what they're going to be like when the regular season ends.  Too much to overcome and not enough good players to help them do it.

- All in all it was a fun weekend.  I got to see The Stadium, I got to see Mo one more time, and I didn't completely jinx the shit out of the series and get the Yankees swept.  The energy in the park in the bottom of the 9th yesterday was enough to give you goosebumps and getting to see a walk-off win almost made up for all the badness of the previous 3 games.  I'm tired, I'm hungover, my bank account took a big hit, and my stomach hates me right now, but it was a great time.  And hey, there's still playoff hope left even after what was basically an on-field disaster.
Posted by Unknown at 12:40 PM