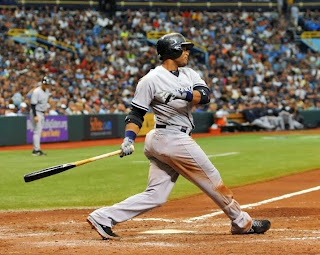 
Think about it from Cano's side.  He's the premiere position player free agent on this offseason's market, he's in his prime, and he plays a premium up-the-middle position.  As one of the top all-around hitters in baseball and a perennial top 5 MVP candidate, he should be swinging for the fences with his asking price and the bar has been set for him by guys like A-Rod and Albert Pujols.  And with a new agent in Jay-Z trying to make a name for himself in the sports agent world, it makes sense that their first swing is that big.  Jay needs to show that he's got the chops to hang in this world and his whole team knows you've got to start high and work your way down to come to an eventual agreement.

As for the Yankees, they know what they're comfortable with for a first offer, and they made one that's more than fair market value while still having room to increase the dollars without going overboard.  Their 7/161 offer works out to a $23 mil per year AAV.  That's over $3 million more per year than Miguel Cabrera is making on his current contract, and Cano isn't nearly as good a hitter as Cabrera.  He's also not at the level that A-Rod was in '07 when he negotiated his 10-year deal and he doesn't have the longstanding career numbers or career peak that Pujols did when he signed his deal.  He's already in his 30s, just like those 2 were when they signed their contracts, and the entire baseball world has seen how those deals worked out.

There's no chance Cano is getting 30 mil a year, for any amount of years, and there's no chance a team is going to offer him 10 years.  The Yankees know that, just like Cano and his people know that.  This is just the 2 sides drawing their boundary lines for the negotiations and setting the stage for what will eventually be a deal somewhere in the middle of those figures, say 7-8 years/$180-200 million.  This is how it went down with Jeter, it's how it went down with A-Rod, and it's how its gone down with other big name free agents in years past.  Let's let some time go by and actually get both sides in a meeting discussing actual terms before we start getting fired up over the reported figures.
Posted by Unknown at 2:30 PM

hey nice post meh, I love your style of blogging here. this blog reminds me of an equally interesting blog on my reading list which is http://danieluyi.com .
keep up the good work meh and also, please visit my blog and drop a comment even if it's a simple "nice post" reply.